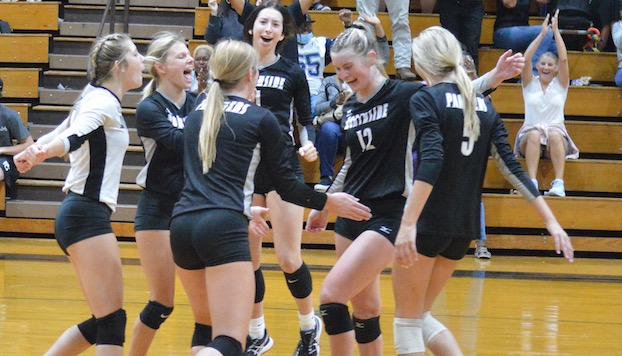 “We controlled the match in the first two sets, but couldn’t close them out in the third set for whatever reason,” coach Michelle Leathers said. “I told them I needed more energy in the fourth and they responded. We set the ball better, which led to good hits to score points. It was a huge win for us in front of our home crowd. We’ve positioned ourselves well for post-season, but have to take care of business in our last four conference matches.”

The Panthers go to Southside (0-12) Tuesday, to 3A South Central Wednesday and host Jones Sr. Thursday.

“South Central is one of our two losses and will prepare us for the playoffs,” Leathers said. “We will face teams with their speed and strong hitting, so hopefully we will be ready.”

Soccer: Southside is 11-2 with seven matches left in the regular season after a 9-1 win at Bear Grass Monday and a 3-0 shutout at SouthWest Edgecombe Thursday.  East Carteret (2A) and Lejeune are the other two conference schools that play soccer, and the Seahawks final four matches make up the league season. Junior Kenny Avila leads Southside with 16 goals and 10 assists, while senior Gabe Matthews has 14 goals and 13 assists. Jonatan Perez has scored nine goals.

The Seahawks host Bear Grass Monday and look to avenge one of their two losses when Camden County (9-3) comes to town Thursday.

Washington is 9-4 and 4-1 in the conference after a 2-0 home win over North Pitt Monday and a 5-1 victory at SouthWest Edgecombe Wednesday. Will Glover scored twice in that win, while Luke Brown, Yahir Ibarra and Williams Figueroa netted the other goals.

“It was a good bounce back week for us after the tough (2-1) loss to Greene Central,” coach Jim Kozuch said. Some of our JV guys got good experience Wednesday and our team continues to improve

Tennis: Washington (10-3, 8-2) is tied for second in the league with Ayden-Grifton with both losses to perennial champion Greene Central. They lost to the Rams, 8-1 Monday, then swept North Pitt, 9-0, Wednesday. The top doubles team of senor Katherine Pollock and freshman Addison Gibbs won their Greene Central match and are 10-2 for the season. Abby Lewis and Olivia Feyer are 9-0 at #3 doubles, while Avery Thomas is 11-2 at #5 singles.