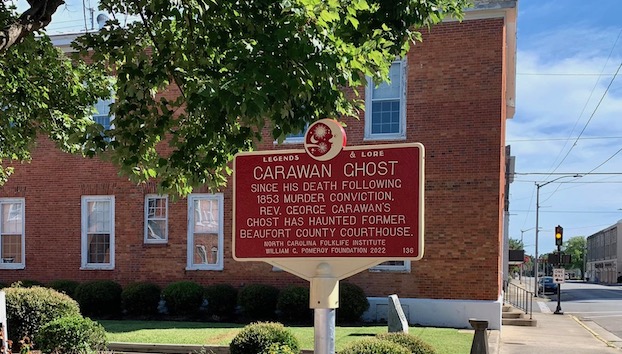 This Pomeroy Foundation Marker was unveiled in July and features the story of the Carawan Ghost. (submitted)

The City of Washington, the Brown Library and the Washington Waterfront Underground Railroad Museum would be delighted to have you come join us this Saturday, October 8 at 12:00 p.m. to celebrate Washington’s newest Pomeroy Foundation Marker.

The new marker will be unveiled in front of the historic Turnage Theater and the subject of the marker is a horse. A very well-known horse, who was a national phenomenon and, a movie star of sorts.  Trigger, the beautiful Palomino horse owned by the legendary Roy Rogers, the ‘King of the Cowboys’ is the subject of the marker. Roy Rogers and Trigger performed at the Vaudeville Theater housed in the Turnage Theater.

The Turnage building was constructed in 1913 with a bakery, shoe store and Vaudeville Theater on the second floor. Touring vaudeville performers and their companies would perform here, including famous acts like Roy Rogers.

Rogers and company toured many parts of North Carolina in the summer of 1939, coming to Washington that year.

That is when Trigger, Roger’s horse climbed the steps to the Vaudeville Theater.

Trigger was an amazing horse. He could sit on a chair, and some folks claim when a pencil was put in his mouth, he could make an ‘x’ with it. Rogers named the horse ‘Trigger’ for his quick ability to learn, saying “the horse “was quick on the trigger to learn new tricks.”  Most of the kids of the late 50’s and 60’s remember Trigger on the Roy Rogers T.V. Show. A few of us can tell you the name of Dale Evan’s horse (Buttermilk) and Roy’s dog Bullet. But it was Trigger who was the real star of the show (my opinion.)  And as Roy and Dale rode off singing ‘Happy Trails to You’ (written by Dale Evans) as the show was ending, that made a lot of kids want a horse like Trigger.

The marker’s narrative reads “Trigger, Roy Roger’s horse climbed the steps of the Vaudeville Theater when Roger’s appeared here in 1939.”

The Pomeroy Foundation markers are a tremendous asset to Washington and a huge tourist attraction. I have seen so many people taking pictures in front of them.  They really are beautiful, and we hope to have more placed throughout the city.  In addition to the 12 North Carolina Highway Historical Markers in Washington that feature Washington’s history, and host a historical trail, the Pomeroy Markers add a wonderful accent to the town’s people and places without being heavy on the historical side and make a story trail of legends and lore.

Leesa Jones is a Washington native and the co-founder and the co-executive director of the Washington Waterfront Underground Railroad Museum.