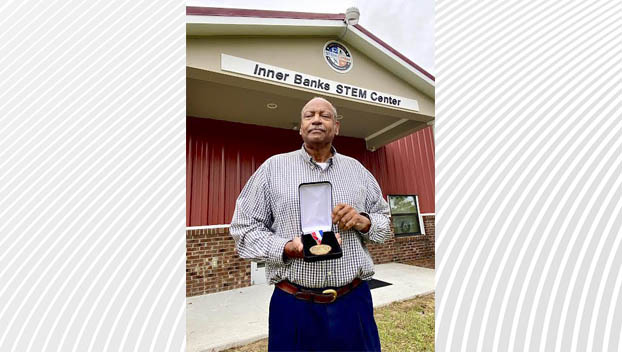 Alvin Powell is the president of the Inner Banks STEM Center which is a 501(c)(3) nonprofit in Washington that helps underprivileged teens discover opportunities and find new passions in Science, Technology, Engineering and Math related fields. He was awarded a Governor’s Medallion for Volunteerism this spring which is the highest honor a North Carolinian can receive for volunteer efforts. Photo by Holly Morgan.

Alvin Powell was awarded a Governor’s Medallion for his volunteer efforts with the Inner Banks STEM Center and the Coast Guard Auxiliary. He was presented with the award earlier this year in the spring.

Powell is president of the Inner Banks STEM Center, a 501(c)(3) nonprofit organization that hosts aviation, drones, boating and renewable energy camps in the summer for at-risk youth. It is the mission of the center to introduce local kids to possible career opportunities and/or new passions within a Science Technology, Engineering or Math (STEM) related field. The goal is to have kids inspired to pursue their dreams and how to realistically do so.

To implement its mission, the Inner Banks STEM Center partnered with the U.S. Coast Guard Auxiliary. Powell serves as the Staff Diversity Officer for Division 20 of the Auxiliary. The collaborative effort helps kids see what members of the Coast Guard do in addition to helping the Coast Guard possibly recruit future guardsmen. Kids were taught “the importance of integrity, accountability and workforce diversity while building life-skills and gaining insights into opportunities offered through military service,” according to a summary of Powell’s volunteer service that was part of his application for the award. The application was sent in by Kris Bowen, literacy and outreach coordinator with the Beaufort-Hyde Partnership for Children.

In addition to his work at the Inner Banks STEM Center, Powell has also conducted diversity workshops with local organizations to discuss diversity and inclusion. Also, he served as a financial literacy instructor in Beaufort County high schools teaching freshmen about money management. He recruited students for the AmeriCorps STEM East Program, an afterschool and summer camp program where students develop life skills and serve as instructors at Inner Banks STEM Center programs.

Powell said it was an “honor to be recognized” at the state level for work completed at the Inner Banks STEM Center. He counts his volunteer work worth it in many ways, but one definite way is when Powell learned that a former camper joined either the U.S. Navy or the Coast Guard because they attended a summer camp at the center. Also, former campers have changed their major in school because they have the self-confidence to study a STEM subject after attending one of the center’s camps.

Cliff Williams, a long time and close friend of Powell’s, nominated him for the award. Williams said he and Powell met around 1995 in New Jersey. Williams’ “tenacious, analytical and sharp-minded” friend deserves the award because he possesses a genuine care for his community and he is one of the most honest and caring people Williams has ever known. Williams helped advise Powell on how to create a resource for kids in the community to help better themselves. At that time, Powell ran a program out of a recreation center. That program has since evolved into the STEM Center.

According to VolunteerNC, Beaufort County has had five previous Medallion Award recipients: John Morgan (no relation to the reporter) in 2009, Jane Alligood in 2012, Trudy Nelson in 2013, Emily Albera in 2018 and Chrislyn Wedderien in 2019. The Medallion Award was implemented in 2006 to honor the top 20-25 volunteers in the state. There can only be one recipient from a county each year. A statewide panel reviews nominations to determine award recipients. This year, there were 22 recipients across the state.