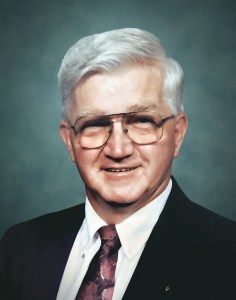 John was born on April 27, 1935, in Durham County, and was raised by Emma Winstead and James Enoch Smith, in Washington. John attended Beaufort County Schools and was a 1953 graduate of Washington High School. He later served in the US Navy during the Korean War and served on the Icebreaker USS Atka AGB-3. On March 21, 1957, he married the love of his life the former Marie Wynne of Williamston. John worked for Weyerhaeuser of New Bern, retiring in 2002 as a Lab Technician with 42 years of service. John and Marie lived in Vanceboro and later in Trent Woods for many years.

After his retirement he and Marie relocated to her hometown of Williamston, where he became an active member and deacon of Memorial Baptist Church. He was a member of the American Legion, The Martin County Arts Council, The Roanoke Country Club, he was past member of the Williamston Fire Dept. and Rescue Squad, and The New Bern Golf and Country Club. John was a lover of life, and avid golfer and loved to shag. John worked with Walker Funeral Homes for a number of years as a funeral service assistant and greeter, where he was known for welcoming everyone, especially the ladies with a big hug. John was preceded in death in addition to his parents and wife, by two sons, John Carter Davis, Jr. in 1979 and Michael Neil Davis in 1991.

A celebration of his life will be held Monday, October 10, 2022, at 11:00 AM, in the Gazebo by the lake at Greenleaf Memorial Park in New Bern, with Lee Johnson officiating. Military Honors will be rendered.

Online condolences may be directed to www.walkerfh.net Walker Funeral Home of Williamston is serving the Davis family.