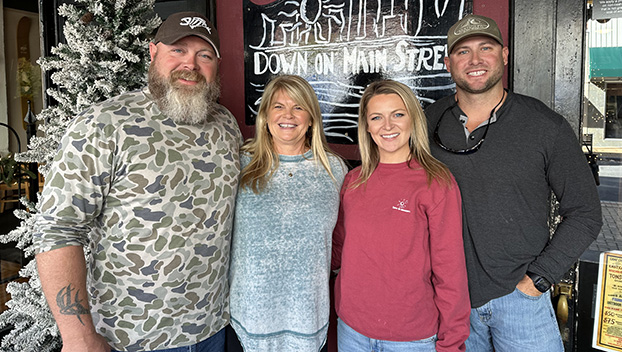 From left to right: Glenn and Gennia Weatherington and Marina and Lee Wood stand in front of Down on Main which is located at 107 W Main Street in Washington. (Holly/MorganWDN)

Glenn and Gennia Wetherington are leaving Down on Mainstreet in the hands of Beaufort County natives who have a long history at the restaurant.

The Wetheringtons have owned the restaurant since 2005. They also own a gift shop across from the restaurant called NautiLife. Gennia said NautiLife will continue to be open and operate as usual, except she will work full-time there.

Down on Mainstreet was started as a casual dining restaurant. The Wetheringtons started the restaurant because at the time, they felt Washington had several high-end restaurants, but it needed a place with a fun atmosphere where people could come from their boat wearing board shorts and flip flops and not feel out of place.

The new owners Lee and Marina Wood are from Beaufort County like the Wetheringtons. Marina worked at the restaurant for eight years starting when she was 16. Down on Mainstreet is where she met her husband. It has been her dream to own a restaurant.

“I wanted to own a restaurant, but it’s so hard to do from the ground up,” Marina said. “[The Wetheringtons] have had a pretty good one for the past 17 years. I heard they were wanting to sell so we contacted them.”

Lee added the Wetheringtons have helped them transition into new ownership. “They could have said ‘alright here you go. Fly.’ But they have helped us out a lot through this whole transition. We really appreciate that.”

It’s bittersweet for the Wetheringtons to transition out of ownership.

Wetherington likened watching the City of Washington grow over the last 17 years to watching a child grow up. He believes Washington is “definitely starting to prosper and heading in a great direction.”