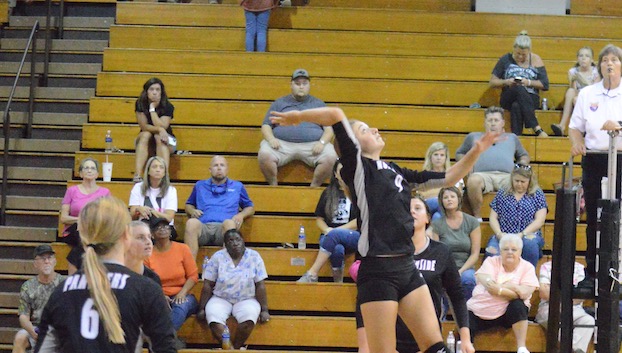 Northside (19-6, 9-1) tied with Pamlico County for the regular season conference title, then lost to the Hurricanes in the league’s tournament final.

The Hurricanes Layla Prescott was named Player of the year and April Rose was the Coach of the Year.

Captains Baker and Black along with DeHoog and Smith helped the Panthers to the second round of the 1A state playoffs, where they lost to East champion Perquimans.

“All are very deserving because they proved it on and off the court,” coach Michelle Leathers said. Jean Grace blocked with force. Hannah Baker was an all-around player for us because she defended in the back, covered the gaps and found the openings of our opponents defense so we could score.

Hannah Black was a power hitter who also played all around and Paige Smith knew she had to place the ball where our opponents didn’t think we could. She also made their back row adjust to her serve. They all improved as the season continued by being more vocal, adjusting to the flow of the game and helping our team prepare for the playoffs.”

Dail was the Seahawks captain and setter.

Logan was an indispensable member of our team who strived to give 100% whether it was in a game or practice,” coach Haley Hamilton said.  “She helped lead the team on and off the court, and set the standard for what being a captain should look like.  I will forever be grateful for her willingness to work with the younger girls and to help myself and Coach Petty take over this program to improve it for future generations to come. Logan truly embodies the phrase “student athlete” with her high achievement in the classroom as well and I cannot wait to see her success during her final softball season.”

Three players from East Carteret, two from Lejeune and one from Jones, joined the locals on the All-Conference team.