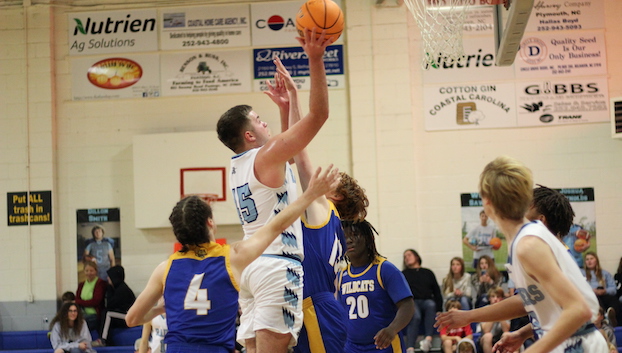 PCA’s Drew Van Staalduinen goes up for a shot. (submitted)

Pungo Christian Academy’s varsity basketball teams are off to a 4 – 0 start after victories over Washington Montessori, Christ Covenant, Halifax Academy and Albemarle School.

Maddox Lee currently leads the boys team averaging just over 18 points per game. Drew Van Staalduinen, Davis Lee and Austin Garrish are also averaging double figures for the Raiders. Van Staalduinen leads the team in rebounds at nine per game while Quay Artis has been the set-up man for Pungo, averaging seven assists per game.

“We’re happy to be 4 – 0 but we still have a lot to improve on” head coach Logan Van Staalduinen said. “I think we can do a better job rebounding and taking care of the basketball but we have played well to start the year.”

Reagan Stoop has paced the girls team wither her 20 points per game average. Stoop also leads the team in rebounds at over 10 per game. Ashley Williford is second on the team in scoring at just under 10 points a contest. The backcourt duo of Abbey Cutler and Ginny Pugh have done a great job defensively and setting up the post to score.

The Raiders are off for Thanksgiving but will be back in action next week. The boys will travel to John Paul II on Monday and both teams will play in Ridgecroft School’s annual Doug Cobb scholarship tournament next week.

Volleyball: Reagan and Anna Stoop were named to the NCISAA All-State team. The sisters helped the Lady Raiders finish 26-4 and claim their second straight 1A state championship. Reagan, a senior led the team with 391 kills and 14 blocks, while Anna, a freshman, had 268 service points.

Soccer: Seniors Davis Lee and Jay Askew earned All-State honors after a 10-4-1 regular season. Lee was sixth in 1A with 32 goals, while Askew’s 164 saves ranked him fifth.