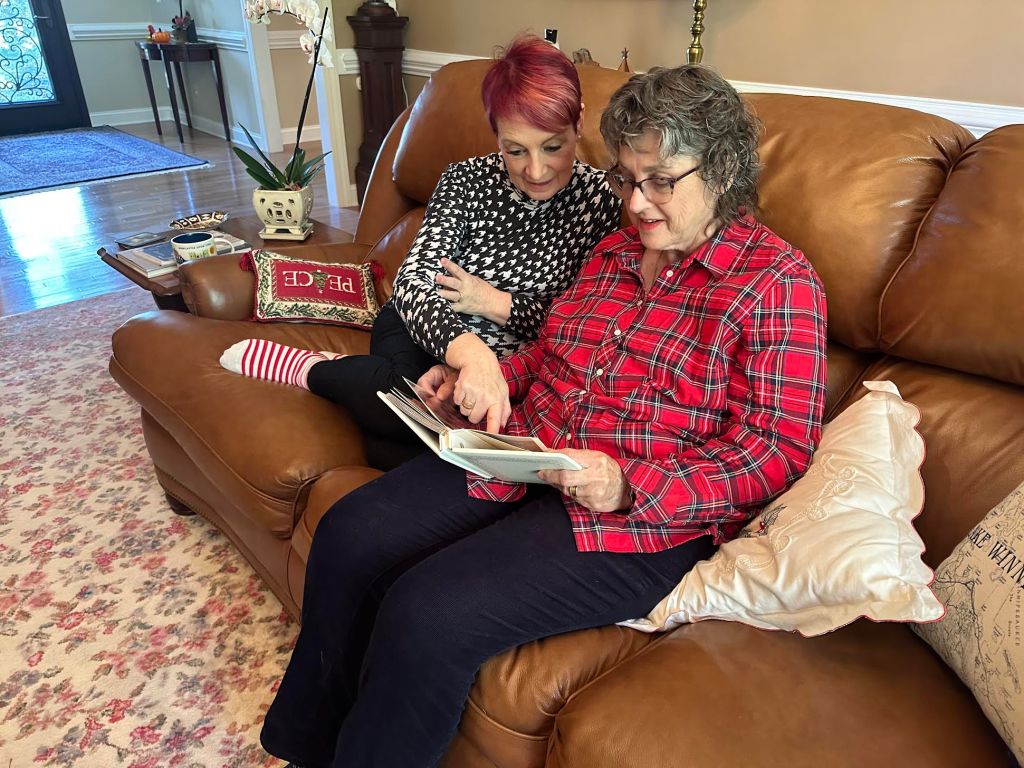 Amanda Brooks (left) and Lisa Strang pour over photos from Strang’s wedding. Strang said Brooks has been the best gift to her life. (Holly Morgan/WDN))

Lisa Strang and Amanda Brooks had much to be grateful for this Thanksgiving – sisterhood and a serendipitous connection uncovered by a DNA test. Strang and Brooks are long lost sisters who found each other through a DNA test and adoption records. Earlier this week, they met for the first time in their lives.

Forty-five years ago, Strang of Chocowinity, started researching possible genetic issues before starting to have children. Her godmother traveled to London, England to do research and returned with Brooks’ birth certificate. Strang and Brooks share a British, biological mother; therefore, they both have British birth certificates.

Strang knew she had a sister, but was unable to locate her until recently.

About two years ago, while on vacation, Strang received an email with a report saying there was a close relative who turned out to be Brooks’ son. Strang reached out to Brooks’ children via Facebook requesting to communicate with Brooks. Brooks’ said one morning her phone kept buzzing with messages from her children encouraging her to contact Strang.  Brooks was stunned with the news of a new relative being found.

“That literally floored me, absolutely floored me. I never, never expected to find family – maybe find my mother, but never ever, never considered siblings,” Brooks said. She continued to say what surprised her the most was finding out that Strang, who is three years older than her, was also adopted.

Brooks and her son used DNA tests from Ancestry.com to find out information about his biological grandparents on Brooks’ side of the family and confirm that Brooks and Strang were a match.

Information Strang possessed about their adoption corroborated what Brooks already knew. There was zero doubt in either one’s mind they were truly sisters.

Brooks is from Lancashire, England. She initially scheduled to travel to North Carolina two years ago, but the COVID-19 pandemic thwarted her plans. Instead, she made her first trip to the United States a few days ago wanting to spend Thanksgiving with her sister.

Strang described the scene when she picked up Brooks and Brooks’ husband at the airport. “I stared at that screen watching for them to come by and I stared at it, my knees started to get weak, my heart was pounding. I never thought this day would happen,” Strang said.

Within 24 hours after her arrival, she and Strang began noticing similarities between each other. They prefer lemon meringue pie over other flavors, they have the same kind of humor and wear similar pajamas. They each have a grandson named Harrison which is not a family name.

“I knew for 45 years – you kind of pray, ‘I hope she has a good life. I hope she’s healthy.I hope she’s happy.’ That’s all I could do,” Strang said. “Then you start dreaming, ‘I wonder what she’s like. Is she like me at all?’ So you start picturing what you’d like your sister to be and she is absolutely everything I could have ever asked for.”

Brooks remained in England after she was adopted, and was raised in eastern London. Strang was raised in New England. How did the sisters end up so far apart?

Strang explained that her adoptive mother was a war bride in England. Her adoptive parents were unable to have children and struggled to adopt in the United States. They traveled to England where they found Strang. They told family members to meet them at Boston-Logan International Airport because they had a special package they were coming home with and it was me,” Strang said.

“The beauty of being adopted is knowing you were really wanted,” Strang said.

Strand and Brooks would like to see changes made to the adoption process. In their shared opinion, the process presents many unnecessary challenges.

“Adoption records are locked up in England,” Strang said. She tried visiting an embassy and several agencies, but “there were roadblocks everywhere.” A distant, British cousin of Strang’s said she would be happy to help her. “But she still found roadblocks trying to get into this adoption information.”

Strang and Brooks believe that God orchestrated their meeting because they were able to overcome many hurdles with strict adoption laws and records being sealed. They believe He had a special purpose in them meeting this time of their lives. They also believe their adoptive parents, who have all passed away, also had a hand in guiding the sisters toward each other.

Brooks said if any one has a hunch they may have a relative that could be found, then that person should go find them.

“I think if somebody knows that they’re adopted and considering trying to find – do it,” Brooks said with excitement. “Just do it. Don’t regret it.”