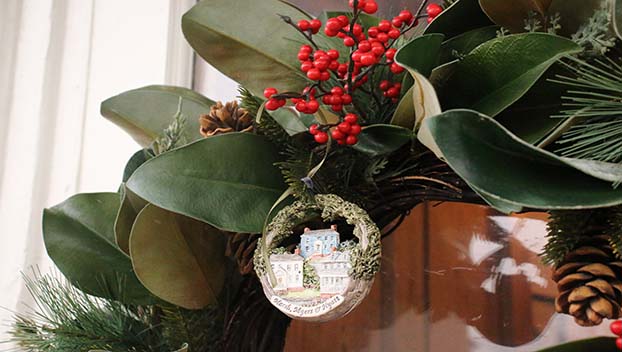 Each year, the Washington Area Historic Foundation (WAHF) preserves a piece of Washington’s history by designing a Christmas ornament which features a historic structure in the city. While some of the historic structures are still standing, others only exist in memory and books.

This year’s ornament highlights three homes on Water Street that were built in the 18th Century – The Marsh, Myers and Hyatt Homes. This historic trio is located across from the Estuarium.

The Marsh Home was built sometime between 1784 and 1795. It is named after one of the possible first owners Daniel Gould Marsh. He started several businesses in Washington related to the shipping industry. He was the brother of Jonathan Marsh who lived in the Palmer-Marsh House in Bath.

The Myers Home remains a mystery because there is little documentation of it. The home has been on the property since 1826, according to an early extant deed referencing the home. The property is named after Polly Blount Myers. The direct former owner, T.H. Blount transferred the property to her. It may have been a wedding gift when Polly married into the Myers family who operated a John Myers & Co. general mercantile store.

The Hyatt Home was built around 1785 and is named after a beloved member of the Washington community, Lockwood Hyattt who owned the home from 1870 to 1893. It has survived a total of 15 owners since it was constructed. In the last 100 years, all of the owners have been women. It is undergoing restoration and will be for sale in the near future.

WAHF began designing ornaments in 1996 with the late Hazel Lassiter. Past ornaments have featured homes, churches, schools, banks and other historic buildings. One of the first ornaments featured a skipjack sailing the Pamlico River. There was not an ornament in 2020 due to the COVID-19 pandemic.

“The ornaments help create interest in preservation of our historic structures, both residential and downtown businesses,” said Dee Congleton with the WAHF.

Ornaments cost $25 and can be purchased at the Estuarium, the Little Shoppes and the Harbor District Market. Proceeds from the sale of the ornaments go toward funding community projects such as landscaping for Harding Square Garden and proceeds will offset costs of historic plaques placed on qualifying homes and buildings.

Congleton said the foundation is planning to reorder ornaments from year’s past. This spring, they will reorder the Ada Mae, a skipjack, the Turnage Theatre and the Bug House.