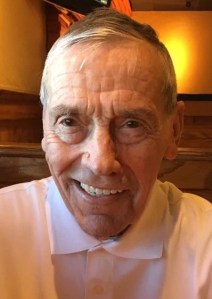 Joseph Michael Whitley passed away peacefully at home on November 23, 2022.

He was born in Chocowinity, North Carolina in 1936 tJoseph Michael Whitley passed away peacefully at home on November 23, 2022.

He was born in Chocowinity, North Carolina in 1936 to Essie R. Alligood Whitley and Charles Whitley along with fraternal twin brother, John.  He attended parochial school in Washington, NC and at age 16 left for prep school at Belmont Abbey College in Belmont, NC, working on the school Dairy Farm for room and board to attain his college education side by side with his older brother, Michael Whitley, who survives him. Joe Joe would often tell the stories of how he and his brother hitchhiked across the state of NC to visit home and then again to return to college along with tales of the priests, the cows, the kindness of a woman who ran the cafeteria who took a shine to both young men and tried to feed them a little extra, along with stories of classroom antics and lessons. Losing his father at age 12 while his mother singlehandedly raised 7 children, the oldest at age 16 to the youngest who was 10 months (sister Esther who was the only daughter) at the time of their father’s death, was one of the deepest pains he experienced in life.  Joe Joe was a lesson in perseverance and determination. He was unique, smart, funny, handsome and challenging.  If Joe Joe liked and respected you, you had a friend for life. If he didn’t, that was a tougher story. He met the love of his life, Betsy Mills Whitley, at her Sweet 16 birthday party and he took one look and decided that she was the one for him. He and she never looked back even though their relationship was not supported by either set of parents. Regardless, they borrowed $20 after her college graduation and they married on March 6, 1960 and moved to Red Springs, NC, where he began his 25 year career in textiles as an Industrial Engineer with Burlington Industries relocating multiple times as his career progressed. In fairly short order, they had two daughters, Teraesa (Herbert Follin) followed by Mary Margaret (Cary Grant) a short 15 months later. Joe Joe’s career progressed with Burlington and he subsequently relocated to Danville, VA where he was the Director of Industrial Engineering with Dan River, Inc. relocating to Rock Hill, SC in 1983 making his final career move to begin working for Springs Industries where he retired after 15 years. Joe and Betsy returned to her parents’ homeplace in Chocowinity, NC in 2001 and enjoyed a little over a full year of happiness until her diagnosis with pancreatic cancer to which she succumbed in 2004. Joe Joe was never the same after the loss of Betsy although he persevered through.  Hurricane Irene did substantial damage to the homeplace and he relocated to Archdale, NC closer to family after the storm in 2011. Joe Joe continued to enjoy the company of family and friends from the area and could be close to both daughters and grandchildren. Throughout his life, he loved many things. He loved watching Betsy cook and eating her wonderful food, a great game of golf, playing bridge with the Summerlins, throwing a pig picking, eating at Cellar Anton’s once a week when it was open, having a gigantic steak with lobster tail at Outback, mowing grass on his John Deere lawnmower, having a gin and tonic, watching a Clint Eastwood movie, reading a great book, sitting with his cat or chihuahuas, telling stories and loving and protecting his family along with simply enjoying the company of friends he loved and respected.

He is survived by his daughters, his grandchildren: Clay, Jordan, Daniel and Laura along with great granddaughter, Catherine “Cricket”.  Whenever Joe Joe really enjoyed something, he would say “beautiful”.  He said several times in his last days that his life had been “beautiful”.  He certainly influenced many, loved many and was loved by many.
We take comfort that he is in Heaven, reunited with the love of his life, Betsy, his family and friends most especially his mother, Essie.

A funeral mass will be held at 12 Noon on December 1, 2022 at Mother of Mercy Catholic Church, Washington, NC.  The family will receive friends one hour before the service at the Church Fellowship Hall. Interment will be a private service for family at a later date.

During the Advent Season, flowers are not displayed in the Church Sanctuary.  Memorial contributions may be made to Mother of Mercy Catholic Church, 112 W. 9th street, Washington, NC 27889, the charity of one’s choice or simply use the funds and go have a great meal with your family/friends and enjoy lifting a glass to Joe Joe and remembering him fondly.

Our family greatly appreciates all the prayers, outreach and kindness during these last days and are thankful to God that JoeJoe passed easily and peacefully.  In the end, Joe Joe did it his way.  A life truly well lived.

Condolences may be sent to the family online on Joe Joe’s tribute page at www.cumbyfuneral.com.