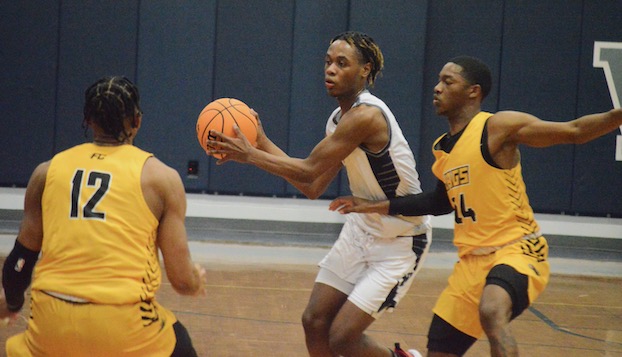 The Washington High School boys basketball team returns only one experienced senior, but there are plenty of younger players to pick up the slack.

The Pam Pack finished 15-9 and 8-4 in the Eastern Plains Conference, good for third place behind Greene Central and perennial East powerhouse Farmville Central.

Sophomore Javon Williams is the Pack’s top returning scorer after averaging 16 points a game. He will reunite with Chocowinity Middle School teammate Chaise Smith to form a potentially potent combination.

“Those two have played a lot of basketball together and will be very fun to watch,” coach David Allewalt said. “We going to throw Chaise right in, like we did with Javon last year, and he will be fine. He has a quick first step and can jump out of the gym. Javon is stronger, more experienced and has added several things to his game. They are excited to be teammates again, so it should be fun.”

6’3 senior forward Christian Norman and 6’5 junior Gary Payne will start down low, while the 6’1 Smith, the 6’4 Williams and 5’11 junior Jerai Davenport round out the starting five.

“All of those guys can help us,” Allewalt said. “Daniels can really shoot it, the guards are quick and we have some height down low. Our defense will be better and we’re planning on getting up and down the floor.”

The Pack will have at least two opportunities to test themselves against Farmville Central, who fell one basket short of winning the 1A state title for the fourth straight time last year.

“They still the gold standard, but we feel like we are closing the gap a little,” Allewalt said. “The key for us against anybody will be to run our plays successfully when our transition game isn’t there.”

WHS opens Thursday at J.H. Rose in Greenville, which starts a stretch of four games in seven days. The fourth is the home opener Dec. 7 vs. South Central.

The Pack plays at Farmville Central Jan 4 and hosts the Jags Jan. 27.