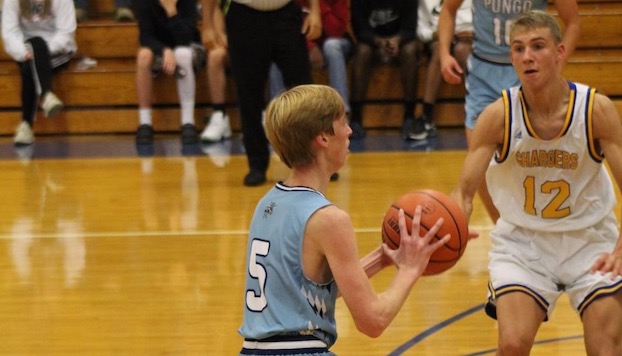 Maddox Lee scored all 25 of his points in the final 20 minutes, but that wasn’t enough as Pungo Christian Academy lost for the first time this season, 72-66 at John Paul II in Greenville Monday.

The Raiders came out with a Thanksgiving hangover, scoring just five points in the first period and 21 points in the first half. PCA was able to hang around and take their first lead in the third quarter thanks to steals from Quay Artis and Bo Spencer.

It was a back and forth game in the final quarter, and the Raiders went toe to toe with the Saints even with Artis sidelined with four fouls. He eventually fouled out with just over 90 seconds to play, with the Raiders up by two. John Paul scored consecutive baskets to lead by two with 10 seconds left. Maddox Lee grabbed a rebound and went coast to coast in the final seconds of regulation to sink a layup and send the game into overtime.

In OT, the Saints were able to capitalize on Artis’ absence and send the Raiders home with their first loss of the year.

“It was a tough loss for our team but I’m proud of how we battled the entire night” head coach Logan Van Staalduinen said. “JP2 is very athletic and we missed a lot of shots we normally make. We’ll build off it and it will make us better moving forward.”

Lee lead all scorers with 25 points. Artis had a season-high 16 and Drew Van Staalduinen added 10 for Pungo. The Raiders shot just 37 percent from the field and shot a season low 62% from the charity stripe.

The Raiders will now look towards the Doug Cobbs invitational tournament in Ahoskie this week when they face the winner of Lawrence Academy/Halifax Academy on Thursday. With a win, they would travel to Ridgecroft School on Friday to take on Southampton Academy/Ridgecroft School.

Meanwhile, the Lady Raiders are 4-0 after a 55-35 Tar Heel Independent conference victory at the Albemarle School in Elizabeth City. Reagan Stoop led the scoring with 27 points, while Ashley Williford added 10. PCA will face the Colts again Wednesday night in the Doug Cobbs Invitational.