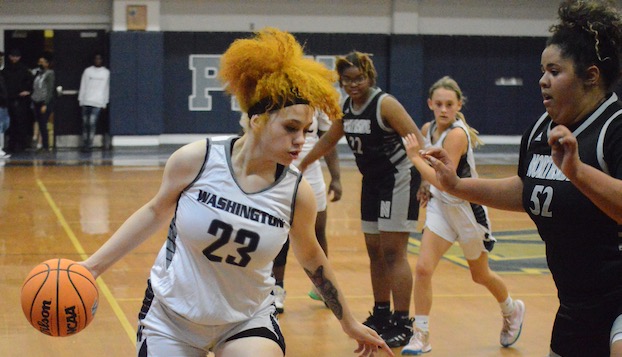 Tyson, who accepted the girls basketball coaching position on an interim basis last fall before he was hired to coach the varsity baseball team this spring, decided to return after a 5-15 season because of his bond with the returning players.

“I wasn’t planning on coming back after getting the baseball job, but several girls asked me to,” Tyson said. “I told them it was my wife’s decision, so they went up to her at our banquet last winter and gave her big hugs. That’s why I’m back.”

Tyson recognized his young teams potential despite their record and the fact that the Eastern Plains Conference is a very competitive girls league with Farmville Central’s and North Pitt’s recent success.

“Our girls have gone through a lot with several coaching changes and I’d like to give them some stability, at least for this season” Tyson said. “We have some talented players returning and some new ones who have potential, so we’ll see what happens.”

Whitley led the Pack in scoring, averaging nine points a game and is the leading returning rebounder.

“It’s her year to shine and I expect her to dominate down low,” Tyson said. “She’s gotten stronger and is capable of a double-double every night.”

The Pam Pack could benefit from three seniors who are on the team for the first time. Katherine Pollock, who qualified for the state tennis championships two straight years, All-Conference volleyball player Sara Hedrick and All-Conference softball player Shaelee Crismon have joined the squad.

“I got some help from my baseball guys who convinced them to come out,” Tyson said. “We needed some depth because of injuries and these three are terrific athletes with some height who will help us off the bench. I see them playing a few minutes every game when our starters need a break.”

Senior Quinique Mooney returns after playing as a sophomore and senior soccer player Jesmelly Lugo is playing for the first time.

Tyson said Farmville Central and North Pitt remain the teams to beat, but Tyson sees the rest of the league being very competitive.

“I am better prepared, so our practices are more productive, which puts us so much farther ahead of last year,” Tyson said. “Avery (Thomas) is more comfortable running the point and with our plays. If she and Haley can stay out of foul trouble, we should be okay in most games. We improved a lot at the end of last season and it would be great to get off to a faster start.”