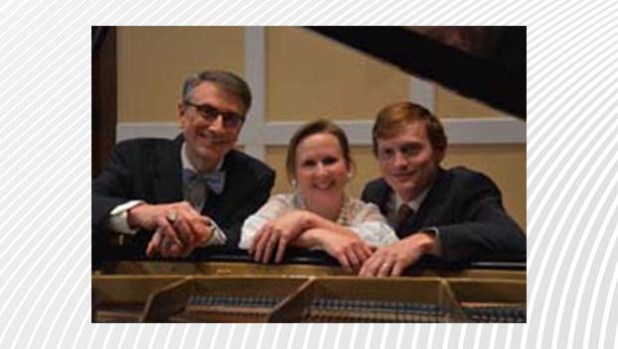 TRIPLE BLESSING Thursday night’s concert will feature piano selections from classical music to Christmas season favorites, performed at First Baptist Church by (from left to right) Pastor Greg Barmer, Leslie Davis, and Jesse Davis, all of whom have gained national and international renown for their expertise at the piano. Photo Courtesy of the Beaufort County Concert Association 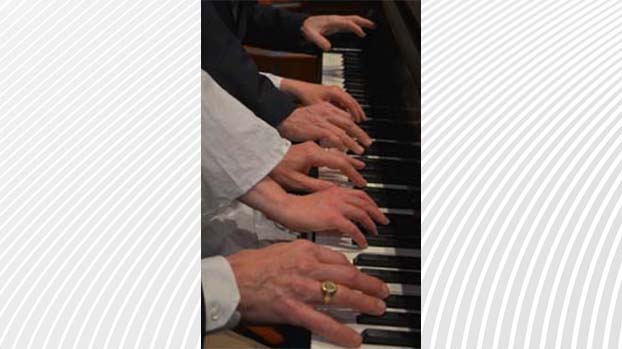 NOT A CROWD The old expression “three’s a crowd” does not apply when discussing the music that will be played at Thursday evening’s performance sponsored by the Beaufort County Concert Association. The three featured piano virtuosos will perform as a trio for several selections, sitting at the same piano bench as they play those tunes together. Photo Courtesy of the Beaufort County Concert Association

A landmark of sorts will occur on Dec. 8, at 7:30 p.m., when the Beaufort County Concert Association features local musicians for the first time in its 45 years of existence. “We’ve never had a local act booked in 44 years,” said Concert Association board chairperson Alma Friedman, who added that the choice of event location – First Baptist Church at the corner of Harvey and Main Streets in Washington – is also a first. The concert association’s performances have traditionally been held at the Turnage Theatre.

This unique performance has its roots in a friendship between Friedman and church pastor Greg Barmer, and a concert last year featuring pianist Neal Pandolfi at First Baptist. Friedman said that the enthusiastic response from Beaufort County’s music lovers, combined with similar enthusiasm among board members, made this a simple decision. “It is something very unique, to have three pianists perform on one piano,” Friedman said, noting that – at one point in the performance – all three piano virtuosos will perform, all sitting at the piano bench, all six hands on the keys while the music is played.

Pastor Greg Barmer will be one of the three performers at Thursday evening’s event. Aside from his graduate studies in ministry at Southern Baptist Theological Seminary, Barmer earned a music degree at East Carolina University. That accomplishment, plus his talent and a passion for worship — helped him become Minister of Music at First Baptist. He has followed what he said was a “divine prompting” in 2019 and, with full support from First Baptist members, has become the church’s pastor.

Washington residents Jesse and Leslie Davis — who met while studying music at UNC School of the Arts and were married shortly after – will complete the local trio. Jesse Davis has performed in concert halls — as a soloist and with orchestras — across Europe and the United States, winning acclaim via international prizes from music associations in Vienna, Paris, Sicily, and the United States. Prior to his position as Minister of Music at First Baptist Church, he directed music at First Baptist Pinehurst, Enon Baptist and Episcopal Church of the Holy Spirit, all in North Carolina. He holds a Master of Music degree from NC School of the Arts  and a Master of Divinity degree from Southeastern Seminary.

Leslie Davis has performed in solo and duet appearances nationwide, as well as in Italy, France, Switzerland and the Czech Republic. Originally hired at First Baptist as an organist, she grew up playing piano. She began taking organ lessons in 2008 and, by 2010, had already been hired as organist at Snyder Baptist Church in Fayetteville. “I grew up loving music,” she said recently. That love, plus her talent, have helped her win invitations to perform with the Salzbury and Durham symphony orchestras, as well as her acclaimed overseas visits. While noting that she “loved it in Fayetteville and planned to retire there, God had another plan…and He has already done so much here” in Washington.

Tickets are still available – although almost sold out – according to Concert Association Membership Chairperson Ronnie Lott, who said any tickets still available on concert night can be bought, either with cash or a check, at First Baptist Church. Memberships to the Beaufort County Concert Association will also be available on concert night  – which, at their most economical level, allow a “single membership” holder to attend three concerts for the $80 membership fee – including Thursday night’s performance. Lott may be reached by calling 252-833-0729.