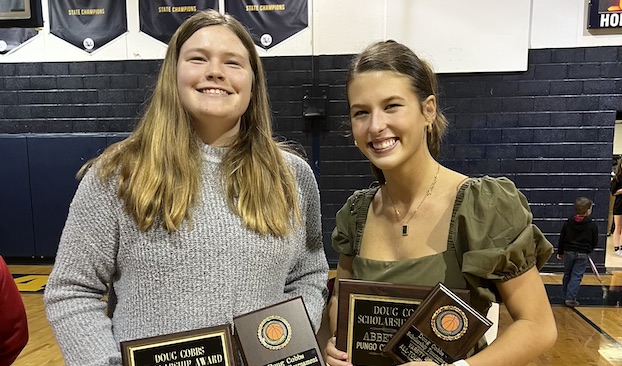 It started on Wednesday with a nail-biting 40-38 victory over Albemarle School. Reagan Stoop led the way with 17 points and 13 boards. Ginny Pugh and Bailey Cox added seven points for the Raiders while Ashley Williford grabbed eight rebounds.

Thursday, the Lady Raiders used a full-court press and man-to-man defense to suffocate the Lawrence Academy offense, sending the Warriors home with their first loss of the season 53 – 41. Stoop exploded for 30 points and 11 rebounds. Pugh added 14 points and Abbey Cutler scored six points with seven assists.

Friday PCA headed north to Ahoskie to take on the Ridgecroft Rams in the championship game. The Lady Raiders outscored the Rams 13 – 1 in the 3rd quarter to pull away and take home the championship with a 50 – 30 victory. Stoop lead the way with 24 points and 17 rebounds, Ginny Pugh added 11 points and Ashley Williford scored seven. Cutler dished out five assists.

Cutler and Pugh were named to the all-tournament team while Stoop was named MVP.

The PCA boys were not able to rebound from their loss on Monday, dropping their second game of the season to Lawrence Academy 54 – 45 on Thursday. The Warriors were able to bottle up PCA’s leading scorer Maddox Lee, holding him to just seven points on the night. Quay Artis led Pungo with 15 points. Drew Van Staalduinen and Austin Garrish each reached double figures with 13 and 10 points. The Raiders struggled from the field yet again, shooting a dismal 27% from the floor.

“We didn’t play bad tonight, we just could hit our open looks” head coach Logan Van Staalduinen said. “We took good shots and just couldn’t convert. Thankfully its early because there are definitely some kinks to work out”.

The Lady Raiders are 7 – 0 while the boys are 4 – 2. Pungo will host all three of their games this week with matchups against Faith Christian, Kerr Vance Academy and Cape Hatteras.