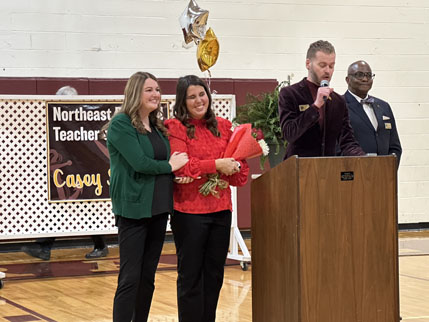 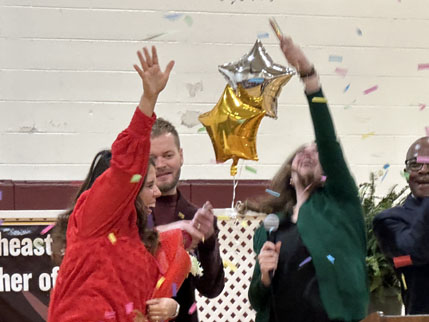 From left to right: Schulte, Todd, Carper and Roberts celebrate Schulte’s award as the new Northeast Regional Teacher of the Year. (Holly Morgan/WDN) 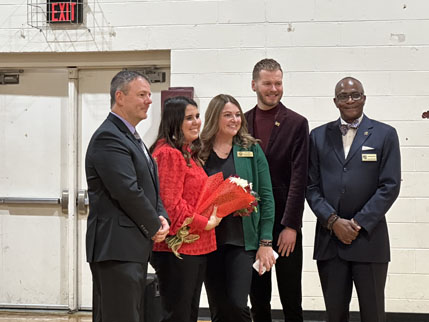 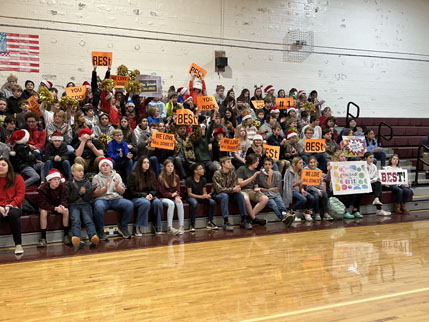 Students held signs with encouraging words when Principal Charles Clark announced there was a “surprise” for Schulte. (Holly Morgan/WDN) 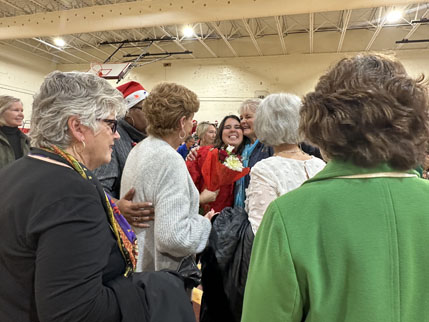 Schulte takes in many hugs and congratulations from her former Bath Elementary and Northside High School teachers. (Holly Morgan/WDN) 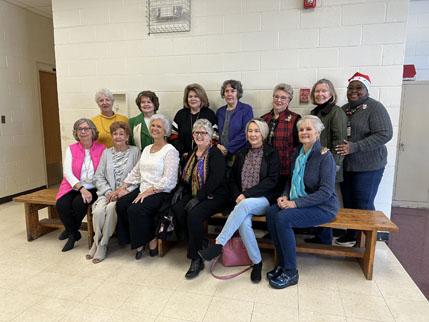 Casey Lewis Schulte, a history teacher at Bath Elementary, thought a Christmas pep rally was being held in the school’s gymnasium on Tuesday, Dec. 13. Little did she know it was actually an announcement that she had been selected as the 2023 Northeast Regional Teacher of the Year. This places Schulte in line to possibly win Teacher of the Year for the state of North Carolina.

Gathered in the gymnasium were Bath Elementary students and staff dressed in Christmas attire. Students eventually unfurled posters congratulating Schulte when Principal Charles Clark said the school had a surprise for her. The announcement was kept under wraps for weeks until Tuesday morning.

Schulte said she was “a little surprised” by the announcement.

“I am so excited and incredibly honored to represent not only our school but our community and all of the great teachers across the state of North Carolina,” Schulte told the Daily News after the announcement.

Marshal Chase is a student of Schulte’s who was on an interview committee for the award. “She’s an all around great teacher. She brings fun to school.”

Principal Clark said what makes Schulte a great teacher is her “enthusiasm that she brings to the classroom every day. She’s excited, the kids are excited about going to class. She’s a member of the community. She went to school here. So having that background makes it a vested interest for her and the school. She’s a shining light for our school.”

Assistant Principal Kim Bisset said Schulte is a “true Bath Pirate,” because she attended from Kindergarten to eighth grade. “Her heart has always been here and it will continue to stay here.”

Some of Schulte’s elementary school and Northside High School teachers were present at the announcement.

Terry Everett, a retired teacher at Bath Elementary since 2008, taught Schulte in the seventh and eighth grades. She said Schulte was a “very good student” who was “interested in everything.” Everett remembered that Schulte sat in the first seat on Everette’s immediate left. Everett established a concept-based North Carolina history curriculum which Schulte uses in her own classroom. Everett said she is “so proud” of Schulte.

Margaret Ann Woolard was Schulte’s second grade teacher. She described Schulte as a “bright and vivacious student.” She continued to say Schulte is “carrying that energy all the way up through and now she’s exuberating it with her own students.” Woolard say she is also “so proud” of her former student and “happy” to know how much effort Schulte puts into being a teacher.

Schulte’s family was also in attendance. Her husband, Adam said, she “puts so much heart and soul into everything that she does on a daily basis for these kids and [the award] validates all the hard work she puts in.” Adam said his wife “constantly” thinks about her students and makes sure they feel loved and supported.

Clark said awards like Teachers of the Year can help motivate future generations to become educators because if they can see the “recognition that our teachers get and to see how rewarding this job is..” He continued to say the award is a “showcase” for great teaching and how “rewarding” teaching can be.

After the announcement, Schulte went back to her classroom to teach about the Gilded Age and immigration in the United States from 1850’s to the early 1900’s. “We’ve got work to do,” she said enthusiastically.

Schulte is a seventh and eighth grade social studies teacher at Bath Elementary. This is her second year at Bath. “Mrs. Schulte began her teaching career in Oxford, North Carolina as a high school biology teacher, before moving on to Wake Forest High School in Wake Forest, North Carolina. This will be her 12th year of teaching. Mrs. Schulte’s classroom is full of energy and meaningful interactive experiences. She enjoys providing hands-on learning experiences for her students, classroom transformations, and providing opportunities to take ownership of their own education,” according to Beaufort County Schools. Schulte is an alumna of NC State University where she earned two undergraduate degrees in Biology and Science Education and a Master’s Degree in Science Education.