The going rate of a memory: Artist sells work in Washington 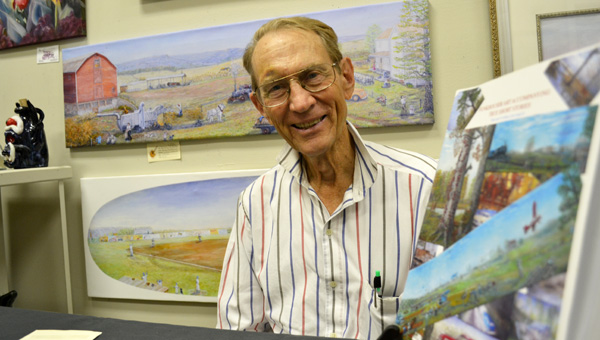 TRUE STORY: Each of artist Dewey Funkhouser’s paintings is based on a memory.
MONA MOORE | DAILY NEWS

Dewey Funkhouser has been painting in one form or another for more than 50 years.
“I ought to know more about painting than I do,” he said.
One of Funkhouser’s first jobs was painting buildings, inside and out. In 1959, he started his own business, painting parking-lot stripes. Funkhouser didn’t try painting canvases until 1986.
He was living in Florida and feeling down in the dumps. He felt he had lived a boring life and had no memorable stories to tell.
“I was just feeling sorry for myself,” he said.
Funkhouser pulled into a shopping center and parked under a tree while he composed himself. That shopping center happened to have an art-supply store.
“The first one was pretty crude, but it got better and better,” Funkhouser said of his attempts at painting.
In hindsight, Funkhouser said, his opinion of his life up to then was completely off the mark. He had served in the Army, knew how to fly planes and had played professional baseball for a few years.
For a short period, country singer Patsy Cline was his next-door neighbor.
“We were around the same age (12),” Funkhouser recalled. “She would stand on her head, and her dress would drop. She was a neat person, but she only lived there next to us for about seven or eight months.”
An upside-down flashing Patsy Cline made it into one of his paintings. Like the country-music legend, many of Funkhouser’s memories have found their way onto canvas in the 27 years he has been an artist.
One called “Sunday Morning Fly-in at the Pig Patch” was about a place he used to take his plane and picnic. He has paintings of him and his baseball team, the Florida State League’s Lakeland Pilots.
“We won the pennant in 1954,” Funkhouser said.
“I tell you, it’s amazing,” Funkhouser continued. “I can start on a painting about a memory and — this sounds corny — sometimes I feel I can smell that day.”
He remembers days on his family farm and the frigid air hitting him as he was loaded into an ambulance at 9 years old. Funkhouser had osteomyelitis, a bone disease that many did not survive in the days before penicillin.
Funkhouser’s friend, Betty Leech, suggested he make a book of his paintings and the stories behind them. He said it gives him the chills when people tell him they like his work, and then love it that much more after reading the stories behind them.
Funkhouser hangs a lot of his work in his Greenville home. He will stop along his staircase two or three times a week and reminisce about the subject of one the paintings.
He sells giclee prints of all of his work, but said he would have no problem parting with the original  work if someone was willing to pay the going rate for a Funkhouser memory, around $10,000.
“Here’s the idea, if I want a thousand dollars: if you counted the time it took to paint it, it wouldn’t be enough,” Funkhouser said. “People aren’t going to pay $1,000 for them. So why not put $10,000 on it?”
Funkhouser’s work is sold exclusively at the Inner Banks Artisans’ Center, 158 W. Main St., in downtown Washington. He said he is too loyal to sell elsewhere and would rather not peddle his paintings.
“I’ve been in lots of art stores and have never been in one as nice as there,” Funkhouser said of the art center. “Once you try so hard to sell them, the pleasure goes out of them. And I want to enjoy my art the way it is now.”