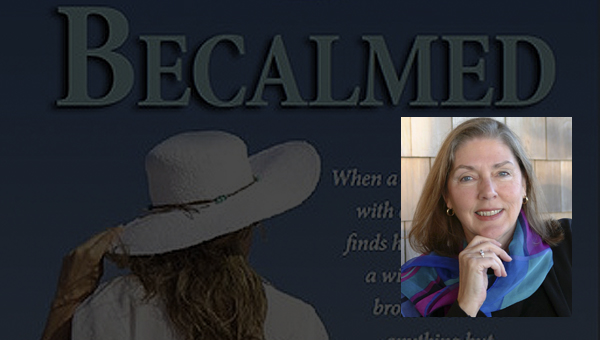 FISCHER | CONTRIBUTED
CRUISING: Author of women’s fiction, Normandie Fischer, will host a book signing party aboard Sea Venture on Monday from 4 p.m. to 6 p.m. “Becalmed” is her second book.

Those in search of some new reading material might find it at an unlikely place: the Washington waterfront.

From 4 p.m. to 6 p.m. Monday, author Normandie Fischer will be selling and signing copies of her two novels “Becalmed” and “Sailing out of Darkness” from the deck of her 56-foot Hudson 460 sailboat. The stop in Washington is part of a book signing tour by the waterways that has taken Fischer all the way up the east coast and back this fall. It was a local “Becalmed” fan, and her mother, who convinced Fischer to sail into Washington on the return trip.

“Becalmed” may be billed as romance, but according to Fischer and the many reviews on the website Amazon.com, the depth of the characters and story marks the novel as something other than a traditional romance.

“It’s pegged as a romance, but it’s not a romance. Romance readers would be disappointed — there are rules to romance and romance readers expect those rules to be followed,” Fischer laughed.

Instead, “Becalmed” is a love story made all the more enticing by a matchmaking child, a lonely widower determined to keep on sailing and woman in her mid-30s who’d never quite found the right partner in life, a character based in part on Fischer’s aunt, a spinster she took care of in her aunt’s later years. The characters’ lives are wrapped around the water and life aboard, a life Fischer knows well.

Fischer and her husband, Michael, bought their boat in Mexico in 2003 while they were living in San Francisco. A restoration project, it was 2008 before they took it on their first adventure, sailing down into the Sea Cortez, wintering in Mazatlan. In 2010, her mother’s declining health sent the Fischers, and their boat, back to the east coast, but not before they and Fischer’s 83-year-old mother Ella, sailed through the Panama Canal before settling near New Bern.

Fischer writes about sailing from a sailor’s perspective, and that is what hooks many readers of her work, she believes. That extends to her book signings aboard: the readers may come out to purchase a signed copy, but the boat is the main draw.

“It’s the boat that really attracts people. They want to see the boat,” Fischer laughed. “They can’t believe that people live on a boat, though we only do it part of the year.”

As with many of her book signings, Fischer will donate the proceeds locally. In Washington, those funds will go to “Celebrate Recovery” at Harvest Church, billed as a step study program for hurts, habits and hang ups.

Fischer’s boat, Sea Venture, is docked at Dock B on the Washington waterfront. Along with books to purchase, refreshments will be served during the signing.