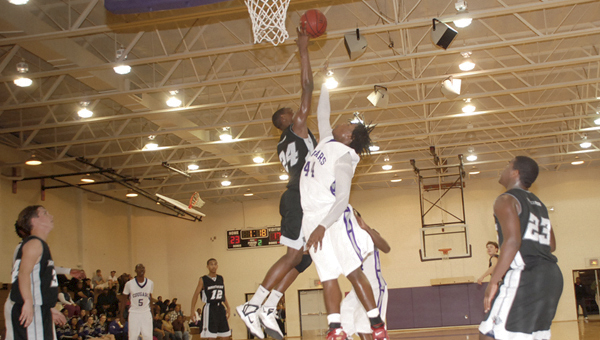 Northside’s Edrice Adebayo (24) blocks a shot during a game last season. As a freshman, Adebayo averaged 17 points and 19 rebounds for the Panthers last year.

PINETOWN — Last year Northside’s 6’8” freshman sensation Edrice Adebayo may have been a bit wide-eyed during his rookie campaign.
This year, those eyes are locked in and laser-focused.
“The biggest change I’ve seen in him is that offensively he’s just got much more confidence,” Northside coach Mike Proctor said.
Not that he necessarily lacked belief in himself last year, as he led the state in rebounding with over 19 boards per game, while tallying 17 points per contest.
However, this season Adebayo, who is listed as the 11th best prospect in the country in the class of 2016 by ESPN, has added an inch to his frame and more accuracy to his jumper.
“He’s shooting the ball better and he’s a much better offensive player this year than he was last year,” Proctor said.
According to ESPN, Adebayo is currently being recruiting by heavy weights such as Duke, UNC, N.C. State, Maryland and Georgetown, to name few.
The Panthers went 15-9 last season, and with the return of Adebayo and versatile 6-2, 232-pound senior G/F Antonio “Boot Man” Woods, Northside has an extremely talented core.
“We’re going to have to run everything through them,” Proctor said. “The other guys will give us a lot of help, but everything will go through them offensively and defensively.
“They’re working really, really good together right now and I feel like they will be the strength of the team.”
Woods, who has started for the Panthers since his freshman year, excels at slashing to the basket and is the perfect compliment to Adebayo.
In the past Woods has been given the green light to attack at will, but this year he will play more of a point-forward role, with an emphasis on facilitating the offense.
“Boot Man handles the ball very well for a big guy and his jump shot has gotten much better,” Proctor said. “I can see him playing inside and outside. He’s going to more or less run the offense wherever he is.
“We’ll feed off of Bamm (Adebayo), but he’s got to be in charge. He’s going to drive too, but he’s also going to get us into our offense.”
Northside will surround Boot Man and Bamm Bamm in the starting lineup with an athletic group of players that includes Malik Slade, Jaquan Sessoms and Dazuan Jones.
While the tandem of Adebayo and Woods should be enough to get Northside in the playoffs, in order to make a lengthy run the Panthers will need a third or fourth player to elevate their game.
“I think between Malik and Jaquan, both of them are good and can do a lot of positive things,” Proctor said. “They’re both good defenders. They’re both right there and I think they can both be real, real solid this year.”
On offense, the Panthers will push the tempo on occasion, but will mainly look to set up and exploit mismatches. Defensively, look for Northside to lock down and play man.
“We’d like to try to get down the floor and run our fastbreak, but if not we will run our motion offense,” Proctor said. “We’ll be fast, but not as fast as Southside, Pamlico, Plymouth and those guys.
“On defensive, we’ll play a little more man-to-man this year because our personnel will allow us to, but we’ll mix it up with some zone too.”

Heart the key for Seahawks

Southside coach Sean White’s said the key to success for this year’s Seahawks is to play with heart and determination.... read more