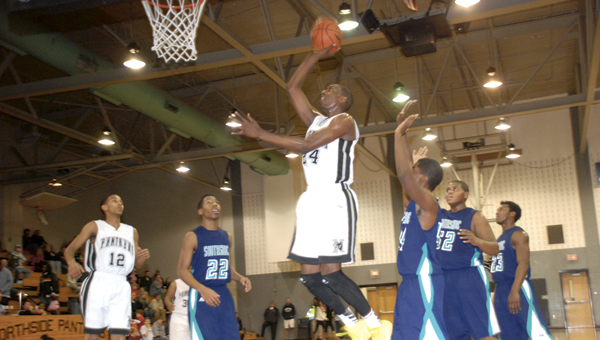 Northside’s Edrice Adebayo racked up a triple-double on Friday as he scored 28 points, grabbed 25 rebounds and blocked 11 shots to lead the Panthers to a 71-56 win over Southside on Friday.

PINETOWN — The game began with the honoring of a former Northside great and was followed by a great performance by a current Northside star.
Oh yeah, plus there was that helicopter parked in centerfield.
It was a busy night at Northside High School, as the Panthers hosted the archrival Southside Seahawks on Friday and retired Jermaine Sutton’s No. 10 jersey, as N.C. State head coach Mark Gottfried sat in the stands wondering what Edrice Adebayo would look like in Wolfpack Red.
“It was a great night for Northside, especially the basketball program,” said Northside coach Mike Procter, whose Panthers beat Southside 76-51. “We had the N.C. State coach fly in. We retired Jermaine’s jersey, and he was a really, really great player for us, and we got a win against a Southside team that played us tough.”
Gottfried created a big buzz for the matchup as he took a chopper from Raleigh to Pinetown and landed it in the middle of the Panthers’ baseball field to come and watch the 6-8, 200-pound Adebayo, who’s listed as the 11th-best prospect in the class of 2016 by ESPN.
The versatile Adebayo is currently being wooed by several big time schools, but it’s safe to say Gottfried escalated the recruiting war with his grand entrance.
The helicopter was all the talk inside the halls of Northside High School, and added extra excitement to what was already a good basketball night.
“It was pretty cool,” Procter said. “I liked it. It created a buzz around Northside and I think it was good for our school and community.”
Adebayo did not disappoint. Unfazed by all the hoops hoopla, the sophomore star racked up a triple-double by pouring in 28 points, grabbing 25 rebounds and blocking 11 shots to up Northside’s record to 5-0.
“It felt good to see one of the best coaches in NCAA basketball here and my team was very excited,” Adebayo said. “I’m kind of used to (being scouted), but everybody else in the school was excited because they’ve never seen a coach like that in the school.”
Before Adebayo’s triple-double dunked the Seahawks, Northside paid tribute to Sutton, who graduated in 1992 and averaged 20 points and eight assists as a Panther.
“Jermaine was a fierce competitor,” Procter said. “The thing I like about Jermaine is that in my 27 years nobody has thought the game like my better than Jermaine. And I’m not saying that I think the game better than anybody else, but how I view the game of basketball is exactly how he viewed it. We were always on the same page.”
The Seahawks (2-4) tried their best to contain Adebayo and Co. but trailed 17-10 at the end of the first quarter and 38-20 by halftime.
“We were trying to double down on (Adebayo) front and back and but he’s still got a foot over everybody, plus he’s got good reach,” Southside coach Sean White said.
Point guard Donshae Miller led Southside with 17 points, while Philip Smith added eight.