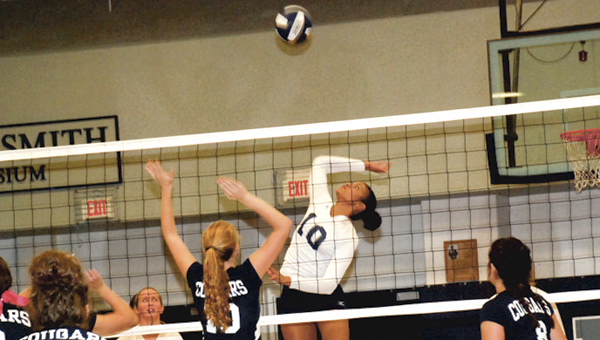 Washington’s Adriana Tyson (10) tallied 214 kills and a team-high 83 blocks to help the Pam Pack go 18-7 and capture its first playoff win since the ’90s.

The 2013 volleyball season was marked by stellar performances from some crafty veterans, along with a few breakout efforts by a couple of rising stars.
Washington, led by WDN Player of the Year Megan Corey and Coach of the Year Kelly Slade, was able to pick up its first playoff victory in over a decade.
At Riverside, first-year coach James Ward did a tremendous job filling the shoes of the wildly successful Herbie Rogers, as his Knights went 22-2 and won the Two Rivers Conference crown.
In Northside, the departure of coach Tami Wagaman thrust Barry Boyd into the role of head coach and he flourished. Led by the outstanding play of outside hitter Alex Cutler, the Panthers went on to win the Coastal Plains Conference title.
The Seahawks struggled at times this season, but also showed promise. Despite not having the size of other squads, Southside always battled hard as it was led by the gutsy play of Katie Laughinghouse.
Laughinghouse and Cutler were just two of several players that highlight the 2013 Washington Daily News All-Area Volleyball team.

ALEX CUTLER, HITTER
NORTHSIDE
The Northside senior was the driving force behind the Panthers successful season. With good height and athleticism, Cutler was able to smash a team-high 150 kills to help Northside capture a conference crown.

KASEY HALL, SETTER
RIVERSIDE
The heart and soul of this year’s Riverside team, senior setter Kasey Hall did just about everything for the Knights. With great feet and hand-eye coordination, Hall was able to get to a lot of balls and always put good touch on her passes, as evident by her team-high 390 assists.

KATIE LAUGHINGHOUSE, HITTER, SOUTHSIDE
Perhaps the most versatile and athletic player on this year’s team, Southside’s Katie Laughinghouse excelled at all aspects of the game. Never the tallest player on the court, Laughinghouse was able to make up for the height disadvantage at the net thanks to some amazing hops. Her jumping ability and strength made her a force on both offense and defense.

ADRIANA TYSON, HITTER
WASHINGTON
It was a real breakout season for Washington junior Adrian Tyson. The Pam Pack hitter thrived at the net, racking up 214 kills and a team-high 83 blocks thanks to her acute court awareness and hustle.

LAWSON PERRY, LIBERO
RIVERSIDE
One the most scrappiest players around, Riverside libero Lawson Perry played a vital role on the court for the Knights. With cat-quick instincts and seemingly endless range, Perry was able to tally a team-high 75 digs for the Knights.

LAUREN SITTERSON, SETTER
SOUTH CREEK
A great athlete, South Creek’s Lauren Sitterson was a jack-of-all trades for the Cougars this season. Sitterson’s speed and court awareness allowed her to cover a lot of ground when playing in the back, while her jumping ability and strength made her a formidable foe at the net.