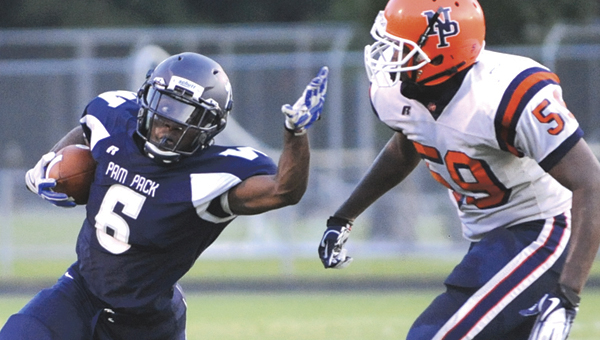 Washington running back Markel Spencer (6) rushed for 1,936 yards and 17 touchdowns for the Pam Pack this season.

The 2013 football season was one for the ages. Washington, led by Washington Daily News Offensive Player of the Year Stevie Green, won the Eastern Plains Conference crown and captured a school-record 12 wins to advance to the state semifinals for the first time since 1956.
The Plymouth Vikings reeled off 14 straight wins to extend the programs’ overall streak to 27. Along the way they picked up a Coastal 10 Conference championship and a No. 2 finish in the state thanks to a dominating defense led by WDN Defensive Player of the Year Devonte Spruill.
Those two teams weren’t the only ones to have a stellar season. The year was filled with big time plays made by big time athletes and the Washington Daily News has chosen to honor those players with its 2013 All-Area team.

QUARTERBACK
MALIK WEBB, PLYMOUTH
The 6-2, 175-pound junior directed one of the most potent offenses in the area. A dual-threat QB, Malik Webb rushed for over 1,000 yards this season and threw for over 900.

RUNNING BACKS
MARKEL SPENCER, WASHINGTON
One of the area’s premier backs, Washington junior Markel Spencer was a true workhorse. The 5-9, 175-pounder was just as effective between the tackles as he was on the edge as he rushed for 1,936 yards and 17 touchdowns this season.

DEMARKICE PRICE, PLYMOUTH
It seemed like whenever Plymouth needed a big play Demarkice Price was there to make it. The senior rushed for two touchdowns and caught another in the state title game and finished the year with over 1,200 rushing yards and 18 touchdowns, while catching 12 passes for nearly 300 yards.

CHAD DANCE, PLYMOUTH
Like his backfield mate Demarkice Price, Chad Dance was an explosive runner who was nearly impossible to catch up to in the open field. The sophomore had a sensational season as he rushed for a team-high 1,300 yards (11 yards per carry) and led the Vikings with 21 touchdowns.

OFFENSIVE LINEMEN
NEIL JENNINGS, WASHINGTON
Washington sophomore Neill Jennings had a tremendous season for the Pam Pack and was a vital cog in its running game. The 5-10, 220-pounder helped pave the way for two 1,000-yard rushers this season and did a good job in pass protection.

TREY CHERRY, PLYMOUTH
Plymouth coach Robert Cody called Trey Cherry one of the best centers in the state and it would be hard to argue that. The 6-2, 240-pound junior produced accurate shotgun snaps and helped clear a path for three 1,000-yard rushers during the Vikings 14-1 season.

D.J. BEACH, RIVERSIDE
With its diverse offensive attack, Riverside asks a lot from its offensive linemen and D.J. Beach excelled at it all. The Knights guard was quick enough to help the team run screens and power, while strong enough to get the job done.

AUSTIN JORDAN, SOUTHSIDE
Strong and quick, Southside’s Austin Jordan was a key element in the Seahawks wing-T offense. Jordan’s toughness helped make room for the Southside backs while protecting its quarterback in the passing game.

WIDE RECEIVERS
ROMALIK PARKER, SOUTH CREEK
It was a tough season for the injury-riddled Cougars, but Romalik Parker was a constant bright spot. The athletic Parker, an all-Two Rivers Conference selection, pulled in 25 passes for 481 yards and eight touchdowns, while rushing for nearly 400 yards and three scores.

DANIEL EVERETT, RIVERSIDE
Equipped with great size and strength, the 6-3, 220-pound Everett was the Knights top big play receiver. Everett averaged 17 yards per catch as he pulled in 31 passes for a team-high 536 yards and six touchdowns.

ATHLETE
J.J. WILSON, RIVERSIDE
A tremendous weapon for Riverside this season,  J.J. Wilson seemed to excel at every aspect of the game. The explosive sophomore rushed for 903 yards and 12 TDs, caught 7 passes for 73 yards and completed 9 passes for 153 yards and four touchdowns.

BAYLONE GUILFORD, WASHINGTON
Standing at 6-2, 305 pounds, Washington tackle Baylone Guilford was nearly impossible to move of the line of scrimmage. Also very athletic, the senior tallied 90 tackles and three sacks on the year.

WILLIAM HOLLINGSWORTH, PLYMOUTH
A disruptive force up front, Plymouth nose tackle William Hollingsworth’s play was crucial for the Vikings this season. The 5-10, 245-pound junior two-time WDN first-teamer racked up 131 tackles despite missing some games early in the year due to injury.

LINEBACKERS
DANIEL EVERETT, RIVERSIDE
Riverside senior linebacker Daniel Everett was everything you look for in a linebacker. With good size, speed and instincts, Everett racked up a 92 tackles to lead the Knights defense.

KARIM TOPPING, WASHINGTON
While he may not be the biggest linebacker, Washington senior Karim Topping may have been the smartest. Topping led Washington with 138 stops on the season, while adding five sacks and two interceptions.

BRYANT WILKINS ROBINSON, PLYMOUTH
Fast, athletic and hard-hitting, Plymouth senior linebacker Bryant Wilkins Robinson was a leader on one of the best defenses around. Wilkins racked up 156 tackles this year on a unit that did not surrender its 100th point of the season until the state title game.

BRANDON JACKSON, WASHINGTON
The Washington defense was one of the stingiest around and 6-0, 215-pound linebacker Brandon Jackson was a big reason why. The sophomore had a breakout year for the Pam Pack as his 136 tackles was second only to Karim Topping, while his three sacks ranked third.

SECONDARY
ADRIAN MOORE, PLYMOUTH
The ideal safety, Plymouth senior Adrian Moore was a force in the defensive backfield. The 6-2, 170-pounder intercepted a mind-blowing nine passes this year, while serving as  strong team leader.

AARON LITTLE, SOUTH CREEK
With good size and speed, South Creek’s Aaron Little provided a big presence in the defensive backfield. Little racked up 60 tackles this season despite missing three games due to injury and came up with the game-saving interception during the Cougars lone win of the year.

MALIK SLADE, NORTHSIDE
One of the better cover guys in the area, Northside’s Malik Slade had the right speed and physicality to be a key member in the Panthers’ secondary.