Pack star named WDN Offensive Player of the Year: Green gets it done 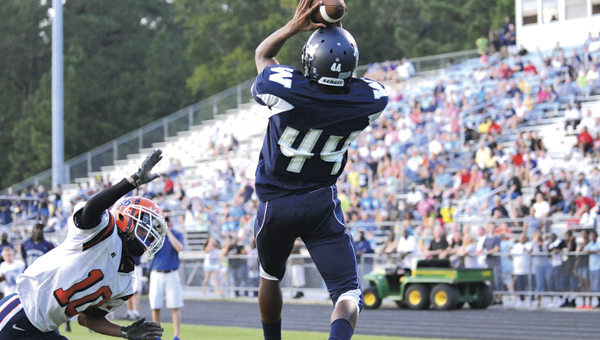 Stevie Green’s ability to play the game of football has never been in question. His ability to lead, however, wasn’t quite as proven.

After a sensational junior year Washington’s do-it-all star entered his season as one of the Pam Pack’s undisputed leaders.

With that in mind, Washington coach Sport Sawyer gave him a little advice.

“He taught me that if you’re going to be a leader then lead well,” Green said. “He said that the others are going to follow as you lead. If you lead wrong then the team will eventually go down, but if you lead right then good things will happen.”

Sawyer would prove to be prophetic. Under Green’s leadership the Pam Pack went on to go 12-3 (5-0) to capture the Eastern Plains Conference championship and reach the state semifinals for the first time since 1956.

“After the West Craven game we were 2-2. We be Tarboro and Conley and lost to Havelock and West Craven,” Sawyer said. “We were getting ready to play Riverside and we told Stevie a few things and from that point on Stevie became a more mature player and a leader.”

Green would finish the season with 1,548 rushing yards and 16 touchdowns, 10 receptions for 248 yards and three TDs, while completing two of his five pass attempts for 40 yards and two scores.

That effort would enable him to be named the Washington Daily News Offensive Player of the Year.

“He wants the ball in his hands,” Sawyer said. “He makes people miss. Even in practice he will run the scout quarterback and scout running back and he plays hard. Knowing a young man will play hard every play allows you to use him in different positions.”

Green said he embraced his many roles.

Green’s main role was running back. Despite not having breathtaking speed or a Hulk-like frame, the Pack senior somehow found a way to stay on his feet and elude defenders.

“When you look at a running back you look for either somebody that is going to blow by guys or run over them. That’s not Stevie, yet he doesn’t go down. That shows a lot of passion and heart.”

Green is currently in the process of weighing through college offers and Sawyer said wherever he decides to go the school that takes him will get not only a good player, but also a good person.

“I’m proud of him as far as the senior year he had and his leadership, but also the work he’s done in the classroom,” Sawyer said. “Not only is he a good athlete, but he’s got a good GPA and he leads in the school. I’m really proud of Stevie in all aspects.”