Top 10 Stories of the Year: Turnage Theater gets a new lease on life 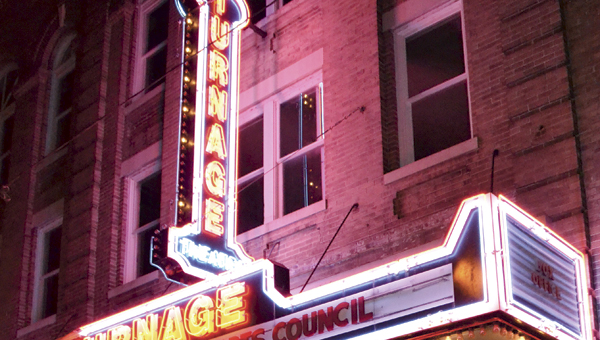 FILE PHOTO | DAILY NEWS
ON THE REBOUND: The Beaufort County Arts Council purchased the Turnage Theater in September. The theater’s marquee was lit for a crowd days later.

The theater dates back to early 20th century. The story of its neglect, then comeback; its bankruptcy, then revival over the past 18 years is No. 2 on the Washington Daily News’ Top 10 Stories of the Year.

Executive Director Joey Toler signed the paperwork in late September, making the Beaufort County Arts Council the proud owners of the Turnage Theater, giving the 40-year-old organization a new home and putting the place for regional arts center in motion.

The theater was a steal: millions had been spent to restore it over an 11-year period spanning the turn of the 21st century. Its purchase was greeted with enthusiasm by downtown Washington merchants, BCAC supporters and performing arts lovers.

On Friday, Oct. 4, those people were out in force as downtown shop owners hosted a champagne Toast to the Turnage, and BCAC. As many as 200 people filled Main Street, as Toler said a few words of appreciation about the people instrumental in making the theater’s purchase possible. Then the old marquee — a bit battered and bearing the works “Future Home of Beaufort County Arts Council” — was lit while confetti poppers filled the air.

Through the month of December, arts council staff and dedicated volunteers spent countless hours moving 40 years worth of art and paperwork to their new space.

BCAC hired a technical director, Stuart Lannon, who immediately went to work restoring lights, sound and rigging in preparation for the first performance in January.

The old theater will get a new chance at life — again.

Turnage Theater played showed everything from vaudeville to B movies through the decades before it was closed in the early ’80s. Sixteen years would pass before a movement to restore the theater would draw the help of businesses, individuals and city government. It took another 11 years, and millions of dollars, to painstakingly return the Main Street theater to its former glory.

In 2007, the theater opened with a sellout reception and performance by students at  East Carolina University’s School of Theatre and Dance. For five years, 20 shows a year, the theater hosted well-known acts like folk singer Richie Havens and pianist Emile Pandolfi, more localized talent, as well as musical sing-alongs like The Wizard of Oz and The Sound of Music.

But in 2011, after four years of a tough economy and dwindling finances, the theater went dark after a December show, ending on a bittersweet note as the Tar River Swing Band played “Auld Lang Syne.”

For two years, the theater languished, the subject of much interest, but little action. The City of Washington expressed interest in buying the theater and sent a letter of intent. A week later, the foreclosed property was sold on the Beaufort County Courthouse steps on Nov. 5, 2012. It was bought by Wells Fargo, one of five banks that held the Turnage’s debt.

Now, arts council staff is transitioning, moving into a much bigger space than before. Over the next year, Toler plans to fill it: with comedy shows and concerts, a gift shop and gallery, exhibits, children’s theater, private events, public events, workshops and more.