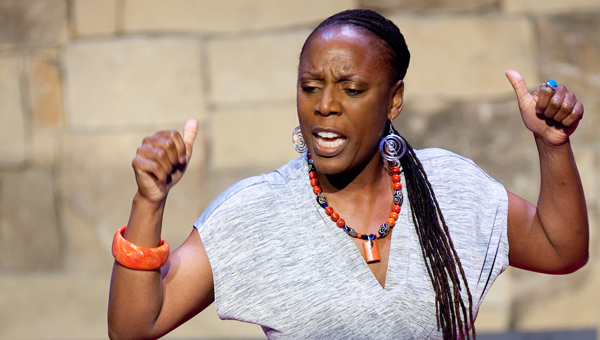 NILS FRETWURST | CONTRIBUTED ROAD WARRIOR POET: Award-winning poet/performer Glenis Redmond will take the stage of the Turnage Theater on Jan. 16. Redmond will be in town for a weeklong artist residency in Beaufort County Schools, funded by Grassroots grant money through the Beaufort County Arts Council.

She’s known as the Road Warrior Poet, traveling over 35,000 miles a year to bring her award-winning poetry to her audience. The week of Jan. 13, Glenis Redmond’s road will bring her back to Beaufort County where she’ll spend the week in Beaufort County schools, a one-woman education in the literary arts for local students. It’s not Redmond’s first trip here — the last time was in 2008, when a combined school residency and performance was such a success Beaufort County Arts Council Executive Director Joey Toler has been working to get her back since.

“We’ve been planning it for almost a year,” Toler said. “We’ve presented her several times before — she’s always really good and her public performance is excellent.”

This public performance by Redmond will have special meaning for many, as she will help usher in a new era at the Turnage Theater, recently purchased by BCAC. The BCAC plan is to turn the theater into a regional arts center, accessible to all of the community.

“It will be our first performance onstage at the Turnage and Glenis is very pleased to be our inaugural show,” Toler said.

Redmond has won many awards for her work, including the North Carolina Literary Award, and is currently one of Kennedy Center Partnership in Education Program’s national workshop leaders. Her website describes Redmond as an artist “steeped in Afro-Carolinian roots, speaks a universal tongue of love, loss, celebration, sorrow and hope. Her verse uplifts family, culture and community.”

That’s what Toler is counting on as she tours eastern North Carolina in early 2014, courtesy of a BCAC Grassroots grant from the North Carolina Arts Council. This month, she’ll spend a week engaging students in the art of poetry at John Small Elementary School and P.S. Jones Middle School.

“It’s a writing residency. (The students will) write things that are in their own lives,” Toler explained, adding that Redmond works with all ages and all types of kids —from the advanced to the at-risk.

In February, Redmond will take her teaching and performance skills to Washington County schools; in March, to Hyde County schools.

But it’s Redmond’s broad appeal as a performer that will bring the crowds to the Turnage on opening night, for the free show, according to Toler.

Entry will be based on a first come, first served basis, and considering the Redmond performance will be the official return of the downtown Main Street theater, Toler is hoping for a huge turnout.

“I’d be happy if we have to turn people away,” he laughed.

Top 10 Stories of the Year: Turnage Theater gets…