Life is Full of Significant Moments 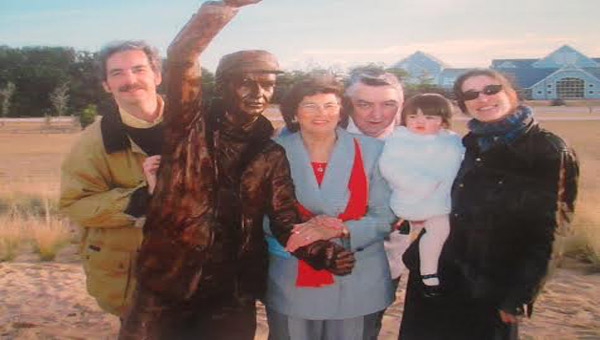 This photo was taken on Dec 16,2005 and left to right is of
Lee, Karen, and Milton Brickhouse , Chloe Davis, and Lisa Brickhouse
Davis. All are descendants of Johnny Moore.

Life is full of significant moments

Johnny Moore was 18 years old when his life connected with an event that is still remembered to this day.

Moore was the youngest of five witnesses to the Wright Brothers’ first flight on Dec. 17, 1903.

Moore, a fishing guide by trade, assisted the Wright Brothers in various preparations for their flight.

“Grandaddy would go out there and talk to them. He would give them fish and the Wright Brothers would give him eggs in return. He always liked them and got to know them real well,” said Karen Brickhouse, his granddaughter.

Brickhouse, currently a Legion Beach resident, noted that Moore thought that being a witness to the flight was not really that special.

“In his mind, he was like everybody else who thought that it would never fly,” said Brickhouse.

The event built on itself in recognition and Moore was asked to go to various celebrations.

“They really wanted him to go to the Smithsonian Institute when they brought the plane from England. Around that time he was one of the few living witnesses left,” said Brickhouse.

Brickhouse gave an important speech at a unveiling of a Johnny Moore statute at a Dec. 16, 2005 ceremony at the Wright Brothers Memorial.

There she related details of her own life and how it connected with Johnny’s.

“I was born in my Grandfather and Grandmother Cloey’s house in Colington. I lived  near by and had the opportunity to stay with them quite often. He was known to be quite a character…very jolly and always joking. My Grandfather was always very, very talkative and always joking,” said Brickhouse in her speech.

Brickhouse noted in her speech then she always looked forward to Dec. 17th over the years as she knew she would be joining her grandparents and her uncle Stanley to go to the Wright Brothers celebration at the top of the monument.

“Following the celebration, we would be invited guests for dinner at the Carolinian Hotel. My grandfather was always recognized at these two events. I felt very proud of him,” said Brickhouse.

Life-size sculptures of Moore and three other witnesses were unveiled that day in 2005. The statutes were meant to recreate what happened at the instant of the flight.

Brickhouse thanked many people that day for making the unveiling of the statues possible including Libba Evans, Kim Sawyer of the North Carolina Department of Cultural Resources and sculptor Stephen Smith.

Online accounts note that there were just four witnesses besides Moore for the Wright Brothers flight: John T. Daniels, who took the iconic “first flight” photo using Orville’s camera, Adam Etheridge, and Will Dough, who were all members of the U.S. government coastal lifesaving crew. Also in attendance was area businessman W.C. Brinkley, who was a curious bystander.

Moore’s legacy was revisited earlier this month on the night of March 14 when members of the First Flight Society came to the Old Salt Oyster Bar to look at a painting of the Wright Brothers Memorial that was presented to Moore on December 17,1948.

The First Flight’s Society’s website has a description of the group:

“In 1927, a group of forward-thinking northeastern North Carolina business and civic leaders began an effort to preserve the original site of the Wright brothers’ flights of December 17, 1903. The group formally organized on August 16, 1927, as the Kill Devil Hills Memorial Association and set about the task of acquiring the site where Orville and Wilbur Wright made their four historic flights in 1903. The location, which was then Kitty Hawk, but has since become the Town of Kill Devil Hills, was chosen by the Wrights because of the windy conditions, open field for flight, soft sand for landing and relative isolation.

Today, just as the Kill Devil Hills Memorial Association was in 1927, the First Flight Society is headed by dedicated people who volunteer their time and expertise to meet the Society’s goals. The members of the Board of Directors of the Society come from many walks of life but all have a devout interest in aviation. They meet regularly to raise funds for the Society’s work, to plan the Society’s annual events, to foster many aviation-related efforts, and to inspire children to learn about and respect the accomplishments exemplified by the Wrights.”

The painting has a plaque that explains it origins:

“This painting of the Wright Brothers Memorial was presented to Lee’s Great-grandfather, Johnny Moore. The governor and the great state of North Carolina commissioned a Wanchese artist and store owner, Ralph Tillet to paint this view with the Old Beach Road and Old Coalington Road split at the base.”

The crude yet historic painting hung on the walls of Johnny Moore’s Colington residence until the passing of his son, Orville “Bud” Moore in 2005. Lee Brickhouse, Karen’s son was eventually appointed caretaker of the heirloom so that many could still share in his family’s pride.

In 1948, Johnny Moore was already the only living witness to the nation’s first flight.

Lee discussed more of his connection to the painting in an interview while the First Flight Society had dinner and looked at the painting.

“I had the painting between the Brickhouse Inn and the McClees Restaurant in the past. We shared it with the guests who stopped through the inns.  We also had it hanging up on the McClees Restaurant wall up until the end of 2009. Ever since then I have just had it over at my house out at Cross Landing,” said Lee.

Lee said the family had been wanting to get the painting restored for a while.

“The painting needs some work and needs to be cleaned. Once restoration work is done, we are going to be putting it on loan to the Wright Brothers National Parks Museum. It will be there for the months of November and December after it takes a short tour with the First Flight Society,” he said.

Lee said that the First Flight Society was getting ready to put an article about the painting in an upcoming publication from their organization.

“They were wanting to make a print copy while the artist is doing restoration work on it, so that they can hang this in the First Flight Society’s offices which are located right by the Wright Brothers Memorial,” said Lee.

Lee said that he has been very proud to carry on the tradition of the painting and  Moore’s legacy.

He can show the painting and share it with the various people he meets.

“The goal was to not put it in a museum permanently, because it was made for the descendants to enjoy and their family members as they pass down the lineage. I think this is a good way to share it and let get into circulation. But then it can go back to hanging on my walls as well as my nieces’ walls someday. You know the fifth generation of Johnny Moore,” he said.