Cross-Country Walk Has Planned Stop in Columbia This Week 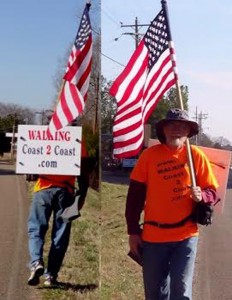 Journeys  begin with the first step.

McGill is scheduled to begin on Wednesday, April 23 on the east end of Ocean Bay Boulevard and hopes to end up at the Santa Monica Pier, in Santa Monica, California for a trip that will cover 12 states and cover more than 3,200 miles.

McGill said his cross-country walk has a planned length of 20 miles per day, 5 days per week Monday through Friday.

His planned course will go along US 64 through North Carolina, part of South Carolina and Georgia, and then through Tennessee, Alabama, Mississippi, Arkansas, Oklahoma, Texas, New Mexico, Arizona, and California.

“I want to promote a new birth of freedom and integrity in America,” said McGill.

McGill said that he thinks America is in growing pains.

“The citizenry is not very satisfied.  There are statistics out there that show that 14 churches close every day. There is a sickness in our country and we need to find healing,” said McGill.

McGill said God came to him in a night dream and compelled him to walk across America to raise awareness of the principles that made America great.

A website devoted to McGill’s cause states that a 2004 Ford Taurus Se wagon will function as the “pace car” for the eight-month event.

Online information also notes that a 2004 Gulf Stream motor-home will serve as a Safe-Station for the time of the walk event. This RV will be parked on the property of “Safe-Station Sponsors” all along the walk route. Pastor McGill, his wife, and up to four other persons can use this vehicle as a place to sleep in safety and comfort each night. In this way, all who participate in the daily walking routine will be refreshed and able to meet a new day’s challenge.

“My wife will in charge of driving the pace car to deliver from me from launch sites, pick me up, and keep me supplied with water. I will move the RV from safe station to safe station. We are relying on the kindness and mercy of people and campground owners as our pockets are not real deep,” said McGill

McGill said he wants to work with local churches along his journey to arouse participation among the members of the various communities.

“As I go through each town, I intend to give a forty day prayer book to all the mayors. It would be really nice if there would be a group of people that went with me and they had a few minutes of prayer to give for the needs of the community,” said McGill.

McGill hopes to be in Columbia April 25.