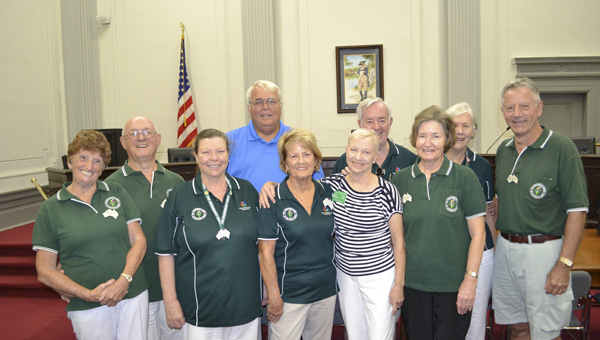 Visitors from Down Under got insider’s look into eastern North Carolina this week courtesy of a unique cultural exchange program.

Pamlico Plantation residents Pac and Jan Hindsley hosted the group of eight people from Australia’s Gold Coast—a group the couple had previously met five years ago, during their own travels to Australia as part of Friendship Force International. Friendship Force International is a non-profit founded in 1977 and espoused by former President Jimmy Carter and his wife Rosalyn, who served as the organization’s honorary chairperson until 2002. FFI members, serving as “friendship ambassadors,” travel to partner cities in over 50 countries, where they stay not in hotels, but in their hosts’ homes.

In 1983, the Hindsleys became a part of Friendship Force through another local Washingtonian, Margaret Hackney, who was friends with Rosalyn Carter, Hindsley said. In the past 30-plus years, the couple has visited such exotic locales as Japan, Turkey, Brazil and Chile, among many others.

For their guests, the Hindsleys planned a whirlwind tour of eastern North Carolina. On Friday, that included fishing, kayaking and sitting on the porch enjoying the Pamlico River, along with a visit with Washington Mayor Mac Hodges and a tour of the North Carolina Estuarium. Then the group made a trip to North Carolina’s oldest town, Bath, and on to the Outer Banks and a night spent on Ocracoke. In between, are visits to the Sylvan Heights Bird Park in Scotland Neck and Hope Plantation in Windsor.

Once they depart Washington, the Australian visitors are also scheduled to visit Charleston, S.C., New Orleans, Houston and Dallas during their friendship exchange in the United States.

For Hindsley, Friendship Force International and its ambassador trips represent not only a celebration of friendship, but an ongoing opportunity to recognize that people across the world have more similarities than differences.

“You really learn what’s it’s like to live in these countries — and then you see that we’re all the same,” Hindsley said. “We all love our children, we all hope for good lives, for peace. It’s just a wonderful organization.”