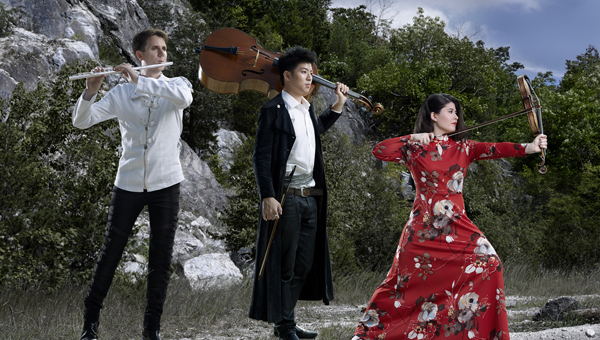 SONIC ESCAPE | CONTRIBUTED
A JOYFUL AFFAIR: Shawn Wyckoff, Nan-Cheng Chen and Maria Kaneko Millar are Sonic Escape, a unique group that will spend next week teaching school programs and offering public master classes in Beaufort and Hyde counties, topped off by a concert at the Turnage Theater on Oct. 9.

They are virtuosos, these Juilliard-trained musicians from New York City. They are travelers, who’ve taken their show on the road for the past five years, playing 30 U.S. states and Canadian provinces. They put on a show “designed to entertain,” wrote a Washington Post reviewer. And they’re coming to eastern North Carolina, to a theater near you.

Next week, Sonic Escape will bring their high-energy performance style to Hyde and Beaufort counties in a weeklong residency that includes two public concerts, nine school performances, one public master class and two school workshops. The programs, presented by the Beaufort County Arts Council, take place from Aurora to Ocracoke, and will be topped off by a Turnage Theater performance on Oct. 9.

“Actually, this will be our most in-depth combination of public concerts and school concerts and master classes for the public so far,” said Maria Kaneko Millar, the trio’s violinist.

She, Shawn Wyckoff — Millar’s husband and the group’s flutist — and cellist Nan-Cheng Chen are classically trained musicians who have moved away from the strictly classical, into a realm that knows no geographical boundaries, incorporating music from around the world. They use voice and movement, making music that Millar calls an “extremely joyful affair.”

Everything they do onstage is in the name of fun. Whether it’s Irish fiddling music that merges into Bach or pieces that get the audience members clapping along, the Sonic Escape is all about audience engagement, an easy accomplishment at the Turnage Theater.

“I like to see the audience when we’re playing. It’s fun to get that feedback. We actually like it when audience members speak to us during the concert,” Millar laughed.

But that not all they do: they’ve traveled the world in roles as diverse as soloing at Carnegie Hall, fiddle-dancing in Riverdance, jamming with Beale Street blues bands, and playing rock clubs across New York City. They also stretch boundaries, using their instruments in ways they’re not originally intended to be used.

“We really try to push the limits with how our instruments can sound,” Millar said.

Millar said she’s looking forward to the group’s North Carolina debut and the opportunity to spend time interacting with students, musicians and audiences — a more fulfilling experience than a single night’s concert in a given place in her opinion.

“I am especially excited for the students who will get to see this group,” said Joey Toler, BCAC’s executive director, who orchestrated Sonic Escape’s mini-tour of eastern North Carolina.

According to Toler, the trio is the most exciting show the arts council has presented at the Turnage so far.

“I really hope anyone who appreciates live music, no matter what style, will show up to support this event.  No one will leave disappointed,” Toler said.

Sonic Escape will also be featured on “Sunrise” with Heather King at 6:40 a.m. Monday.

Tickets to the 8 p.m. concert on Oct. 9 can be purchased through the arts council website, www.beaufortcountyartscouncil.org, or by calling 252-946-2504.