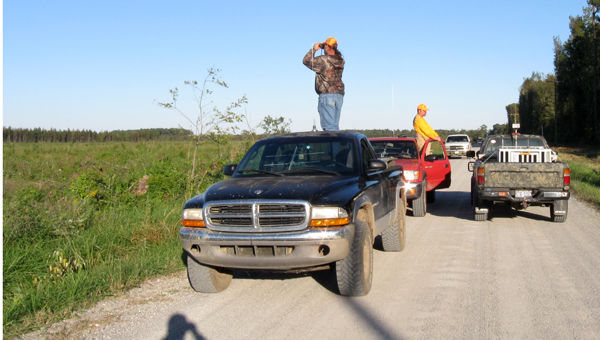 FRED BONNER | CONTRIBUTED
KEEPING AN EYE OUT: Deer hunters scan a recently cleared area to try and spot the deer that their dogs are chasing.

Several years ago a close friend and I were headed down to Pantego to try and bag a whitetail deer with Edwin “Booger” Harris at his Pungo Acres hunting lease. My friend was somewhat of an experienced deer hunter and had brought along his elderly 30-06 rifle that he’d been using for years. On the drive down, I happened to ask him if he’d sighted-in his rifle this year and his reply took me aback a little.

He replied, “I haven’t shot it at all this year because it was shooting just fine when I put it away after the deer season ended last year.” I hoped he was right because a lot of rifles will shoot a little different after having been cleaned and stored for the winter.

When we returned to the hunting camp after the first day’s hunt, my friend was dismayed because he’d missed two bucks during the day and couldn’t figure out why.

“Both the deer were about 150 yards away and were standing still when I shot. As far as I could tell, both shots should have been good. I was holding steady and braced against a log when I shot and, apparently, both shots were clean misses.”

We decided go out to Booger’s shooting range and see just how accurate his rifle was. Aiming at a target about four-feet square at a range of 100 yards, the rifle was shooting nearly 24-inches high and about three-inches left from the center of the target.

My friend told me that when he was target practicing after the close of the deer season last year he was using some old military surplus ammo loaded with the full metal jacket bullet. The ammo he was using for the deer hunt that day was not the same ammo that he’d been shooting after last year’s hunt. In fact, it was ammo from a very different manufacturer that used a lighter bullet and shot at a much faster rate than he was used to.

We hunted out some of the ”old” ammo from the same manufacturer that he’d been using previous years and re-sighted the rifle at the same target. The rifle shot a three-inch group about two inches high from the bulls eye at a hundred yards, which is quite acceptable shooting for deer hunting.

The next day my friend shot a nice six-pointer at about 100 yards. He also swore that he’d never begin another deer season without properly sighting-in his rifle with ammunition that had been successful in the past.

With the price of quality (or any for that matter) ammunition being as high as anyone can remember, it will be hard for many deer hunters to practice and sight-in guns with the more expensive ammunition. Hopefully many deer hunters have squirreled away a few boxes of their old tested and proven ammo for that rainy day when ammo isn’t as easy to buy as it once was.

Assuming the rifle had been carefully cleaned and stored after last season, begin the new season’s sighting-in process by cleaning the gun again to remove any old oil deposits, dust or grime that could have settled over the past few months inside the barrel. Likewise, be sure that someone hasn’t been playing with the sight’s settings.

One shot fired after cleaning should remove any of the old debris in the barrel and give the hunter a better idea of where the bullet will land now. Some minor sight adjustments may be necessary, but when careful adjustments are made, it’s possible that one could bring that old trusted rifle up to deer-killing precision after using about 10 to 15 rounds of ammo.

Since a good number of deer hunters are still using a good shotgun to harvest their venison, it’s a good idea to fire off a few rounds of buckshot or slugs to determine where the shotgun is patterning. In our urbanized society, a lot of states and localities are now requiring shotguns for deer.

Having killed a good number of deer with both slugs and buckshot and having worked on a deer checking station in a state that required shotguns only, I’m a firm believer in the use of slugs in a rifled shotgun barrel as a deer-harvesting tool. Properly sighted in and shooting within the range limitations of the shotgun, the slug is hard to beat. Buckshot will work within its’ more restricted range, but I’ve seen too many deer brought into the checking station with old, festering wounds caused by wandering buckshot. Close in the buckshot is a proven killer but too many deer hunters try to stretch the range of the buckshot beyond what it’s designed to do.

Many good deer hunters will fill their freezers with venison and fill their tags with about 20 rounds of carefully fired ammo. With the recent demand for cheap, organically grown meat, many hunters are returning to hunting deer to put meat on their own family’s table.

With the full gun deer season opening on Oct. 18, please be careful and be safe. Wear hunter orange and be extra careful when hunting from an elevated stand.

SAVANNAH LUCAS | CONTRIBUTED By COREY KEENAN For The Washington Daily News   Washington’s defense continued to shine as it... read more