Panthers pick up win No. 1 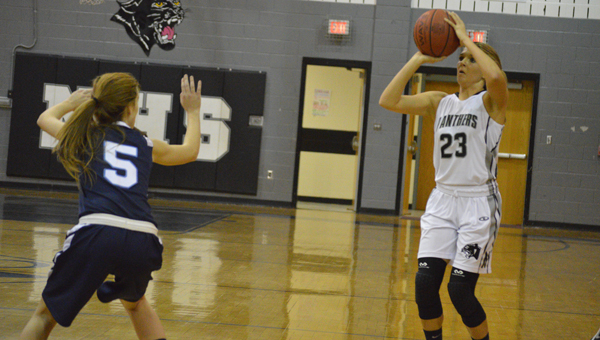 Coming off a disappointing 60-36 loss to Dixon last week, the break allowed Northside the opportunity to get back to the basics and work on tightening the defense. The extra practice seemed to of paid off for head coach Michelle Leathers, as her team picked up its first win of the season.

“We just wanted to get over the hump and get a win. Basically, we’re trying to get wins like that under out belt and get a feel for the team. We’re getting there,” Leathers said.

But while the defense remained poised, the offense struggled early. Errant passes and sloppy ball handling resulted in a handful of easy giveaways, keeping the Nighthawks in the ballgame.

Point guard Alex Adams had difficulty hitting from range early on, but compensating for her low shooting percentage was senior Kelsey Lang, who came through with some big shots down the stretch. Lang’s nine first half points, coupled with Adams’ seven, gave Northside a 30-19 lead heading into the break.

“Alex is really a shooter, so when you have a shooter who is also playing point, that kind of hurts things,” Leathers said. “She’s not really used to having to handle the ball and find teammates.”

With the graduation of Cheyenne Franks, Adams has not only had to maintain her position as a pure shooter, but also assume the role of floor leader. It’s been a difficult transition thus far, however, over the course of the game, Adams began to find a rhythm.

As Lang cooled off, Adams caught fire in the second half. She found teammates in transition, forced instead of committed turnovers and even notched five rebounds. Despite being outscored in a defensive-minded third quarter, Northside finished strong with 19 fourth quarter points, 13 courtesy of Adams.

“Kelsey needs to score. We need to have another person hitting shots besides Alex,” Leathers said. “The first play of the game, it was Kelsey, at the end, it was Alex.”

With the win, Northside improves to 1-2 in the young season and will travel to Hertford County on Tuesday.