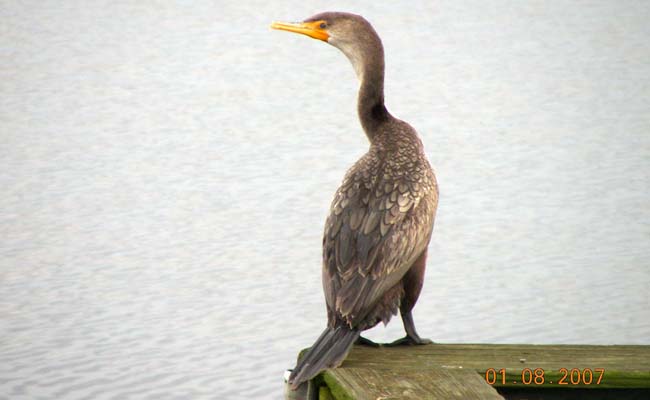 If you’ve spent any amount of time on any of North Carolina’s coastal waters, you are familiar with the long lines of some very dark colored water birds. They fly in modified “V” formations, long wavy lines and, in our coastal waters, massive flocks as they migrate. Duck hunters sometime confuse them with flocks of geese, aquaculturists hate them with a passion and various inland fisheries managers fear that they’re damaging many of our inland fishery resources. They’re known to ornithologists as the “double-crested commorant” and they’re on a “hit’ list that has many bird watchers upset.

As is sometime the case with Mother Nature and her way of managing our wildlife, sometimes these management plans go haywire and a population of some species grows out of control and needs to be controlled by us humans. It seems that the commorants that we’re seeing along our coast may need some human interference to keep their numbers at a more desirable number.

Several years ago, our family spent the Thanksgiving holiday down at Ocracoke and went out in the Pamlico Sound to try and catch some fish. We attempted to cross one section of the sound on which a massive flock of these commorants was feeding and, as a result of our intrusion, the massive flock of birds swarmed over our small boat in unbelievable numbers. We were “bombed” with fishy smelling bird droppings and, frankly, we were a little afraid of the sheer numbers of these fish eating birds. It was like something from Alfred Hitchcock’s movie, “The Birds.”

On our trip back to the west we stopped off in Wanchese and talked with several commercial fishermen who expressed concerns over the numbers of commorants that were so thick they looked like black clouds over Pamlico Sound.

“Probably 50 percent of our clam and oyster beds have been closed to harvest because of the commorants and their droppings. Not only are they spoiling our shellfish, they’re wiping out a huge percentage of the menhaden that are in our sounds at this time of the year. What can we do? They’re protected by federal law.” They also wondered if the commorants could be enticed to attack certain piping plovers that some Outer Bankers have little love for.

Commercial as well as sport fishermen in the Chesapeake Bay area are blaming the shortage of menhaden, a highly important food fish for the striped bass on the Chesapeake, on the commorants.

Aquaculturists in the eastern part of North Carolina have witnessed entire rearing ponds filled with young “wipers” (white bass/striped bass hybrids) nearly wiped out by a marauding flock of commorants.

Even from as far away as Lake Fork in Texas, fishery biologist have reported that the vast majority of age classes one and two of largemouth bass, panfish and any other fish that could be swallowed by these hungry birds, were nearly cleaned out of the huge Lake Fork. Needless to say, the bass fishermen were unhappy.

I’m told that aquaculturists can get a federal depredation permit to kill commorants (as well as other predatory birds) that are decimating their crops of fish. Bird watchers may not like the idea of killing these birds, but what can you do when some animals become so numerous that they are destructive and pose a problem to the public health?

Federal and state wildlife biologists working in in the pest control section of their agencies have been controlling birds such as starlings (an invasive non-native bird), blackbirds, and other birds that have become a problem by spraying their roosting trees with a detergent mixture that negates the oil in the bird’s feathers and literally (even in warmer weather) kills the birds by exposure to lethal temperatures. Specially licensed bird control agents often need to slip into areas surrounding busy airports to literally shoot hundreds of seagulls that congregate too close to commercial and military centers of air travel.

Even our revered Canadian geese that have become “domesticated” and now forgo their winter migration to stay on more comfortable southern golf courses. Special hunting seasons with very liberal bag limits allow hunters to harvest some of these problem, non-migratory geese and hopefully convince them that they should again migrate to the north as they’re supposed to do.

Likewise the snow goose population had grown all out of proportion to what our wildlife managers feel it should be. On their northern nesting grounds the over-populated snow geese are literally rooting like pigs as they feed on the vegetation in that area and they’re having a food shortage for the other nesting waterfowl. In order to help out the “under privileged” waterfowl, the waterfowl managers now set a very long and generous bag limit with added attractions such as electronic callers and un-plugged shotguns for the hunters of snow geese. In extreme cases the managers even went to the snow goose nesting area and interrupted the nest to try and control the new crop of snow geese.

The once highly protected tundra swans became so numerous under federal protection that they were causing problems with grain farmers in our area. Not only were the birds eating the green wheat vegetation, their big webbed feet were stomping down a lot of wheat. The result was that several years ago the U.S. Fish And Wildlife Service allowed hunters to begin to conduct a limited harvest of these birds to try and control their population.

And don’t forget the well-known mute swan. It’s the graceful white (and black) swan that’s seen in so many parks. It’s an import (read that exotic) from Europe and is not welcomed by our waterfowl managers because the mute swan is very territorial and likes to fight with our native waterfowl. In order to keep the peace with the bird lovers, the managers have been finding the nest of mute swans and shaking their eggs to break the contents up a bit then returning the now “dead” eggs to the nest so the swans will continue to set on the never to be hatched eggs. Birth control for the ornamental European mute swans!

So, back to the double-crested commorants that are obviously causing some big problems. Why can’t the U.S. Department of the Interior consider having an experimental hunting season for commorants in our area? Many waterfowl hunters that prefer to hunt the diving ducks in the Pamlico River and Sound are getting tired of seeing so few canvasback and scaup ducks. They always show up after our season is closed and we Tar Heels can’t seem to get our season open later.

I’m sure a lot of frustrated diving duck hunters would consider it to be quite a challenge to have a commorant season to help control these fish eating birds. Of course we’d be required to use non-toxic shot  (up to $40.00 for a box of ten shells) and the commorants probably would be too “fishy tasting” to consume but it would surely be a challenge. We’d need to get more special decoys and maybe even be allowed to use unplugged shotguns and electronic calls as some snow goose hunters are allowed to use.