REAL OR NOT: Digital manipulation focus of River Walk exhibit 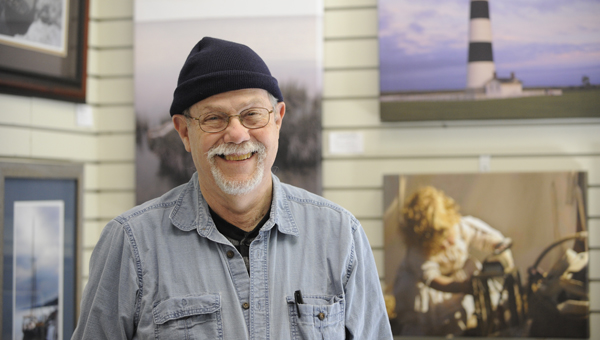 VAIL STEWART RUMLEY | DAILY NEWS
MASTER MANIPULATOR: Friday, a reception launching an exhibit of photographer and writer Alan Welch’s photographs will be held at River Walk Gallery and Arts Center. The guest artist’s work will be on display through the month of February.

River Walk Gallery and Arts Center welcomes a new guest artist for the month of February with an opening reception Friday.

Alan Welch is a poet and a writer. On hand at River Walk are copies of his book “Sea Doggerels — Unsung Songs of the Sea and More,” a collection of poetry and free verse that Welch calls “tongue in cheek.” But not only is Welch a poet, he’s also a photographer and a manipulator of images, whose work is a melding of straight photography and other pieces that blur the edges of photography and fantasy through photo-editing software. Often, it’s hard to tell the difference which is which.

“I like when people don’t know what is digitally manipulated and what’s not,” Welch said.

His photographs feature wildlife, portraiture and landscape. His digitally enhanced images range from landscapes that are a touch surreal, to fanciful portraiture, to scenes and characters that convincingly mix reality with fantasy. For example, his portrait, “Sea Vixen,” is a striking composition: a mermaid suspended in the depths of the ocean, fish swimming all around. Welch used nine separate photos to create the image, extracting a piece from one, a background from another, layering the pieces until the idea of the portrait becomes seemingly real.

Another combines a snowy eastern North Carolina creek with a Viking boat — a piece of fantasy made eerily real.

“All of the work is done in Photoshop,” Welch said. “I refer to it as software to the Gods.”

A fan of the fantasy genre, Welch first became interested in digital manipulation of images in the 1980s, but it wasn’t until the late 1990s that he started working in Photoshop. Since, he’s retired from a 20-year tenure in advertising and marketing at Duke University and now lives on a sailboat in Bridgeton — spending days taking photographs, teaching an occasional workshop and working with images that sometimes require up to 100 layers and require an entire gigabyte of space.

Welch’s blurring of lines between what’s real and not captured the attention of Dr. Jennifer Calfee, a River Walk artist and coordinator of the gallery’s guest artists. Welch had entered a few of his pieces in the Beaufort County Arts Council’s annual photography show.

“I was impressed with the photo manipulation that he does and the wide range of subjects,” Calfee said.

Saturday’s reception will be from 5:30 p.m. to 8 p.m. The reception is open to the public.

The third edition of the Pamlico Writers Competition is…