Red wolves could be declared extinct in NC 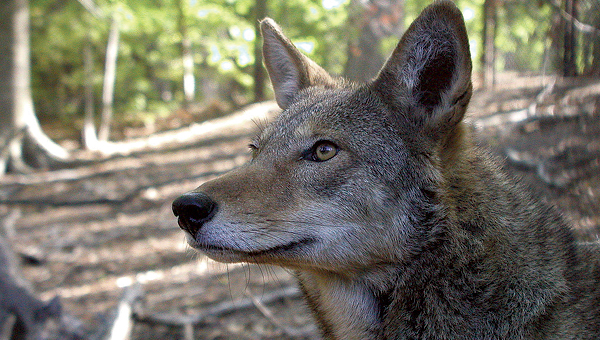 B. McPhee, USFWS
WILDLIFE BATTLE: Declared extinct in the wild in the 1980s, the red wolf has been bred in captivity and reintroduced in a five-county region in North Carolina, including Beaufort County. The North Carolina Wildlife Resources Commission has adopted a resolution to have the U.S. Fish and Wildlife Service declare the species extinct and remove them from private lands.

The problem of red wolves in eastern North Carolina may be heading to resolution as the North Carolina Wildlife Resources Commission has officially presented a two-pronged request to the U.S. Fish and Wildlife Service: remove all red wolves from private land and declare red wolves extinct in the wild.

The requests were the result of a Wildlife Resources meeting Thursday.

According to the first resolution, the request to remove red wolves from private lands stems from the USFWS stated intention to manage the Red Wolf Recovery Plan on federal lands. However, much of the five-county region included in the Red Wolf Recovery Plan (Beaufort, Dare, Hyde, Tyrell and Washington counties) consists of agricultural fields on privately owned land — the habitat of choice of red wolves. The resolution also claims that the USFWS released at least 64 captive-reared wolves on privately owned land, not federal lands.

The second resolution states that the purity of the red wolf genome is now questionable, given that the population of coyotes has increased and introduced hybridization between the closely related species, and addresses the fact that a USFWS report released in October of 2014 found that the Alligator River, Pocosin, Mattamuskeet, Swan Quarter National Wildlife Refuges and the Dare County Bombing Range — all federal land — cannot be restored to provide a sufficient habitat for the current population of red wolves.

“… The North Carolina Wildlife Resources Commission hereby requests that the USFWS: declare in federal rules that the red wolf is extinct in the wild in North Carolina; terminate the Red Wolf Reintroduction Program for free-ranging red wolves in North Carolina; repeal all federal rules describing, delineating, and designating conditions for red wolf restoration; designate all wild canids other than foxes on the Albemarle Peninsula as coyotes or coyote-hybrids; designate that no federal-trust canids exist on the Albermarle Peninsula, and designate that all wild canids on the Albemarle Peninsula are state-trust resources under the jurisdiction of the North Carolina Wildlife Resources Commission,” the resolution reads.

The red wolf debate has long been a hot topic between conservationists and landowners in eastern North Carolina, where the red wolf reintroduction program was established in 1987. Part of the issue was the legality of hunting or trapping coyotes and the illegality of hunting or trapping red wolves, when the two species are so close in appearance.  The killing of a red wolf is punishable by up to a year in prison and $100,000 fine.