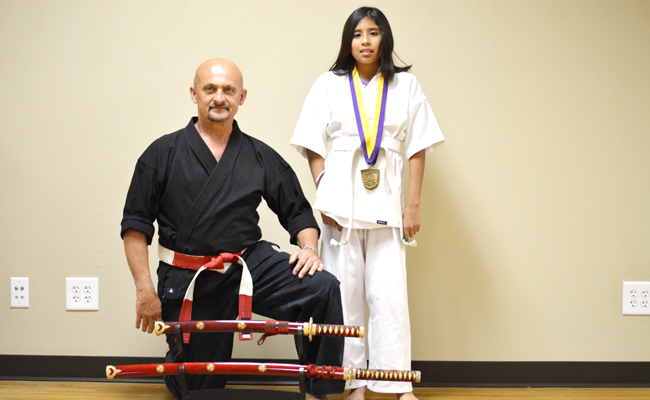 GREENVILLE — There is nothing complex or materialistic about the Washington Karate Academy’s new home in the Athletic Edge Sports & Fitness Center. The walls are bare, storage closet always closed and mirror wall spotless.

On the wooden floor sits a couple of training pads, an analog clock and a photograph, a black and white portrait of Chojun Miyagi, who fused Okinawan teachings with Chinese influences nearly a century ago to create the Goju-ryu school of karate. It’s the same principals Sensei David Warren abides by today.

There was something else on the floor Monday night — a set of swords with matching sheaths, one katana and one wakizashi (or short sword). The brand new blades were awarded to Aida Perez, a student of Warren’s, who took first place in three categories on April 18 at the 17th Annual Open Martial Arts Tournament held at East Carolina University.

It was second time in the last month Perez has earned first place honors in an open karate tournament, the last coming on March 28 at the Kinston’s Karate Madness Open Championship. Perez, 12, was the only Washington Karate Academy karateka to compete in the ECU tournament, which was held at the Student Recreation Center and directed by Sensei T.D. Gribble.

“This was Aida’s third tournament and she seems to be continuously improving and I’m happy she’s continuing to not only compete, but win,” Warren said.

Perez’s performance is even more meaningful, however, as the young student’s Sensei was crowned the Grand Champion of the same tournament 13 years ago. Warren took first place in kata and kubudo (weapons), going toe-to-toe with some of the top Black Belt contenders in the area. From there, Warren went on to win Grand Champion honors four more times — Jacksonville twice (2002, 2004), New Bern Classic (2004) and Kinston’s Karate Madness (2004).

Following the instruction of his elders, Warren has been teaching students like Perez for more than 30 years in Washington.

“The reason Miyagi and the other authors of these katas created these forms was for practicing — form, focus, posture, stance — and the other reason, internally, is for interpretation of the katas,” Warren said. “When you see a punch, it’s likely a punch, but it can also be an escape technique.”

Perez executed her kata (forms) and kubudo (weapons) to the best of her ability, taking first place in both in the 12-13 age division of orange and green belts.

Chandler mentors another promising student in Tianna Van Cura, who could be found running the first 15 minutes of Monday night’s session. And while the academy’s students continue to work their way up the various belt colors and degrees, Warren preaches an eternal philosophy.

“Goal is a word us Americans use in sports. I dislike the word,” he said. “In my opinion, it feels momentary … I like to say it’s a lifetime process and something that you can keep continually doing. Josh has been with me since he was 13 or 14. He’s 31 now.”

“We’re trying to continue the example of discipline, a hierarchy.”