Pam Pack tennis powers through Round 1 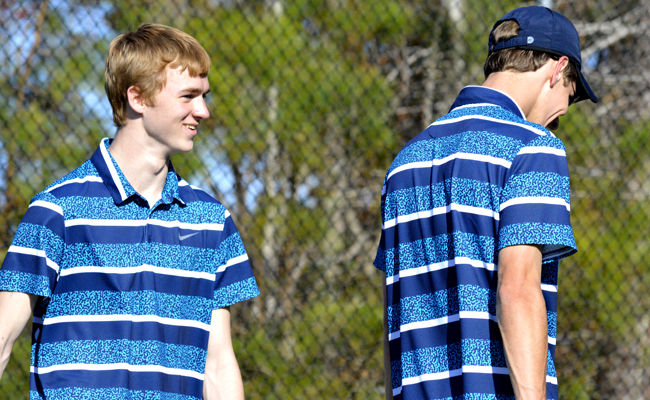 It had been almost two weeks since the Washington tennis team last stepped onto its home courts for a competitive match. On April 15, against the reigning NCISAA 1-A state champion Oakwood Eagles, Washington’s Connor Wilkins and Ben McKeithan were the only players to force their opponent to a third set, though neither pulled out victories, as the team was shutout, 9-0, in a true test of endurance.

The match was a smell blemish in what’s been a near perfect season for the Pam Pack and on Tuesday in Round 1 of the 2-A dual team state playoffs, Washington got back on track with a 6-0 win over First Flight.

“I was feeling good and came out here ready to play,” Wilkins said. “I told myself and told the team, look, we’re getting out of the second round this year. I’m going to do my part and it’s time for you to do yours.”

After last season’s tough field, one that drew up a veteran Greene Central team in the second round (although, the Rams now sport a winless record), Washington has earned a more favorable draw this year, but will still need to play its best tennis down the stretch.

First Flight, a team that finished second in the Northeastern Coastal Conference behind Currituck County, entered with a record of 7-3 (6-2 NCC) and, like Washington, had just one senior on the roster.

At first, the Pam Pack’s top three players got off to rather sluggish starts. Wilkins had trouble placing his first serve, Holt McKeithan experienced some early frustration after some mistimed hits and Zack Pagnani had difficulty returning his opponent’s looping, backspin slices.

“It was a little bit of a slow start, given we haven’t had a match in over a week, but they really focused and got into the match,” said head coach Miranda Whitley. “They did what they needed to do today.”

All three would eventually turn their matches around. Wilkins began to find his comfort zone, hitting a series of perfectly placed forehand winners and refining his high-velocity serve. Despite some minor inconsistencies early, he made quick work of Nighthawks No. 1 Jack Brady, 6-0, 6-1.

“He was a solid player with a solid backhand, very consistent on his serve,” Wilkins said. “I was trying to keep one more shot in play than he did and let him make the errors.”

In one of the lengthier matches of the afternoon, Holt McKeithan battled shot-for-shot with Henry Barnette and similar to Wilkins, Barnette used his agility to track down well-placed shots. After a competitive start, McKeithan began to pull away after the seventh game, taking the first set, 6-3. The Pam Pack No. 2 shook off the early frustration and easily closed out the second set, 6-1.

It cost Pagnani an early game before he figured out the playing style of Jonathan Lawson, but once the Pam Pack No. 3 adjusted to the backspin, he coasted through his match, winning 6-1, 6-1.

On the backcourts, Eric Crozier remained consistent throughout and took care of Joshua Lam, 6-2, 6-0, while Mac Skillen easy knocked off Reid Kelly, 6-0, 6-1, in one of the more lopsided matches of the afternoon.

Ben McKeithan was the last man standing for Washington, but was able to overcome an early deficit and defeat Christian Davis, 6-4, 6-4.

Washington will face the winner of Clinton and Ayden-Grifton next Tuesday in Round 2 of the 2-A dual team playoffs.

Prior to the second round, Wilkins, Pagnani and the doubles pair of Holt and Ben McKeithan will travel to Greene Central this weekend for the individual regional tournament. If the McKeithans, Wilkins and Pagnani walk away with two victories apiece on Friday, they automatically reserve their place in the 2-A individual state championships, which will take place on May 8 and 9. Saturday’s matches will determine the regional champions, as well as the state tournament seeds.