Race for the River slated for Saturday 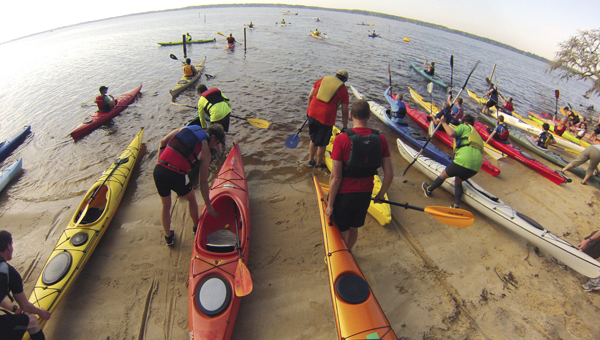 ASHLEY VANSANT | DAILY NEWS
ON YOUR MARK: Racers in the Kayakalon Race for the River prepare to head out on the Pamlico River at Goose Creek State Park. The popular race is open to participants ages 12 and up.

The event Fitness Magazine once called “a race you shouldn’t miss out on” hits the road, and the river, this weekend at Goose Creek State Park.

The 2015 Kayakalon Race for the River starts at 9 a.m. Saturday morning at the park’s Swim Beach. Commonly referred to as a “dry” triathalon, in which the swimming leg of the race is replaced by a mile and half kayaking stint, followed by a 15-mile bike ride and a three-mile sprint to the finish line.

The race is hosted by Sound Rivers, previously known as the Pamlico-Tar River Foundation, an environmental education, outreach and advocacy organization.

“It’s a small fundraiser and a way to also highlight the beauty of the Pamlico,” said Pamlico-Tar Riverkeeper Heather Jacobs Deck. “And it’s fun.”

The fun aspect is what draws people young and old, near and far, Deck said. The race is open to individuals, and teams of two and three, to split up the legs, ages 12 years old and older. Deck said this year, so far, the youngest registrant is 14, while the oldest are in their seventies, the kayakaloners coming from towns across the state for the event.

Originally created by Liane Harsh, owner of Inner Banks Outfitters, to promote the sport of kayaking, the Kayakalon is in its ninth year. And each year is different, Deck said.

“There’s a mile and half course around three buoys in the unpredictable Pamlico. Some years are easier than others, depending on the wind,” she said.

While most bring their own kayaks, participants can rent kayaks from both Inner Banks Outfitters and Sound Rivers. Awards will be given for every age category, male and female, and every racer receives a Kayakalon T-shirt.

Those who don’t care to tackle kayaking, cycling and running Saturday might just want to come down to the park to spend a little time out of doors and see what the Kayakalon is all about, Deck said.

“If folks just want to come out and watch, it’s going to be a beautiful day,” Deck said. “It’s very colorful, with all the colored kayaks out there.”

Registration deadline is tonight on RuntheEast.com, but late registrants can arrive early on Saturday morning. Cost is $55 for an individual, $100 per team.