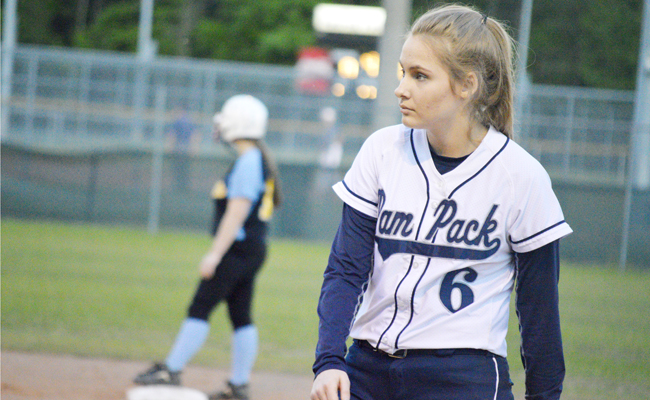 DAVID CUCCHIARA | DAILY NEWS
UPSET PICK: Senior Catie Dority finished the day 2-for-4 at the plate and is currently 6 for her last 8 over the two-games stretch.

About two weeks ago, Washington softball head coach Doug Whitehead made a few phone calls and inserted a Saturday game against Holly Springs, a former 4-A state runner-up in 2012, into the schedule. The late addition, Whitehead said, was meant to give his team a worthwhile test against a respectable opponent, while potentially building some momentum in preparation for undefeated Beddingfield, the No. 1-ranked team in 2-A, on Tuesday.

The Pam Pack went on rout Holly Spring, 15-3, recording a remarkable 16 hits in 25 at bats. And against Beddingfield, the leftover offensive momentum from Saturday’s win came in the form of a two-run first inning, one that ultimately proved to be the difference in a down-to-the-wire, 3-2 win over the Bruins.

“They’re one of the best teams in the state,” Whitehead said. “They have just rolled through their regular season so far. It was the first loss for them and a critical win for us. We have to win out and this was a big first step in doing that.”

The win improves the Pam Pack’s overall record to 13-3 and puts the team in the driver’s seat to lock up second place in the Eastern Plains Conference with two conference games remaining in the regular season. Despite Beddingfield’s perfect record entering the contest, the victory also moves Washington to just half a game behind the Bruins for first place.

Having scored double-digit runs in four of their last six games, the Bruins lineup was introduced to Haley Hutchins full arsenal of pitches — a knee-buckling rise ball, a plus fastball and a painstakingly slow curve, just to name a few. But her outing was far from perfect, as at least one Beddingfield runner reached first in all seven innings. Backed by the defense, Hutchins was forced to work her way out of multiple jams and keep composed under pressure.

After a pair of scoreless frames, the visitors threatened in the fourth. Brianna Hale and Leah Warren started the inning off with back-to-back singles, moving themselves into scoring position after an error by the center fielder. But in what should be considered the impact performance of the game, Hutchins came back and struck out the next three batters to escape the jam unscathed. It was a sterling individual performance by the team’s undisputed leader, one that saved the game down the stretch.

“It’s something she is used to doing,” Whitehead said. “This isn’t her first rodeo. And she’s just got great movement on her pitches with great defense behind her, making plays.”

One of those plays came in the top of the fifth with two outs and a runner on first when left fielder Jada Lodge fully extended to snag a short line drive, ending the frame saving what would have surely been a two-run, inside-the-park homer.

In the bottom of the fifth with one out, Hutchins contributed at the plate, jumping on a fastball early and blasting a towering home run to left-center, a “no-doubter,” which gave the Pam Pack a surprising but hardly comfortable 3-0 lead.

“The thing that kills us sometimes is when they get the first runner on base, which they did every inning but one,” Whitehead said. “That’s tough to fight back the adversity, but Haley did a great job.”

In the sixth, again it was Hale and Warren who led off with back-to-back singles, except this time, both would cross home plate. Cassie Dail followed the singles with a double to the fence in right-center, plating Hale. Warren later came around to score on a ground out to the second baseman.

After a 1-2-3 bottom of the sixth, Beddingfield’s Monique Ransome led off with a single in the top of the seventh and would eventually find her way to third base as the tying run. But Hutchins retired the next three batters, the final via the strikeout, and Washington went on to secure its biggest upset in recent history.

“We were talking about it all week how this was a must-win situation,” Whitehead said. “We have to help ourselves and if someone can help us beat Beddingfield that would be great, but that’s one of those things that’s hard to do.”

Washington will seek six in a row when it faces North Pitt in Bethel on Friday.

Pam Pack tennis powers through Round 1