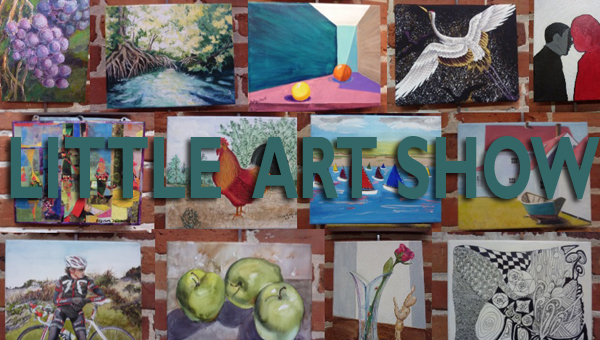 BEAUFORT COUNTY ARTS COUNCIL
LITTLE ART OVER THE YEARS: This collage of art donated to the popular Beaufort County Arts Council fundraiser, the Little Art Exhibit, is just a small sample of the unique pieces that have been purchased, handed out, traded and bartered for over the last several shows. The exhibit goes on display today and the closing reception will be held May 15.

Little Art is back.

After a year hiatus, the popular art exhibit and fundraiser for the Beaufort County Arts Council goes on display today at the Turnage Theatre gallery in downtown Washington. In the midst of a move to its new home at the Turnage, BCAC took a break from the fundraiser in 2014, but the 2015 display is now up and viewable during regular business hours. The closing reception, in which each piece of Little Art will make its way off the wall into the hands of its new owner, will be held May 15.

“The unique aspect of the fundraiser is that patrons do not know which work they will receive until the closing reception,” said Joey Toler, executive director of BCAC. “All pieces are randomly numbered and patrons receive a number (or numbers) of their choosing at the time of purchase. At no time are the numbers known to the public — even BCAC staff is not aware of the numbering system.” 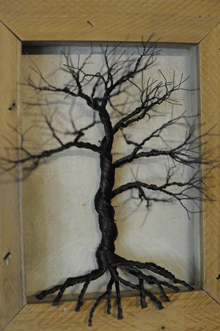 VAIL STEWART RUMLEY | DAILY NEWS
WIRE TREE: This mixed media piece of Little Art consists of wire and wood on canvas and is just one of many submissions to the Beaufort County Arts Council fundraiser.

The art comes from the arts community both near and far: BCAC passes out 8-inch by 10-inch canvases to artists and they’re simply asked to create something, donate it back to the arts council and are sold for $30 each, or four for $100. The donation from many different artists leads to a vast array of style and media, Toler said.

“We have a big mixture this year. We have 3D pieces, fabric pieces. We have oils, acrylics, watercolors, mixed-media, photos. There are pastoral scenes. There are abstract pieces, and everything in between,” Toler said. “That’s what’s fun about this show: you get a little bit of every thing. And some of them are just exquisite.”

The exhibit will be on display until the closing reception will clear the walls of art, which is always a fun event, according to local artist Katerie Leach.

“I think the best thing about the whole deal is getting the entire art community, and even people that don’t paint, to participate,” Leach said. 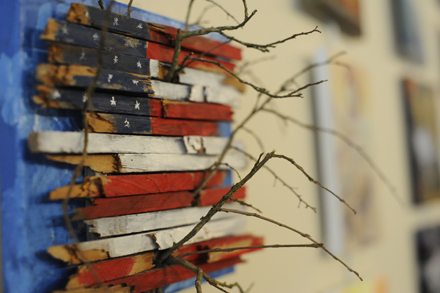 VAIL STEWART RUMLEY | DAILY NEWS
AMERICAN ART: Wood, paint and a little bit of nature — this rustic American flag is truly a unique piece of art and can only be found at the Little Art Exhibit, a Beaufort County Arts Council fundraiser.

Leach contributes as many as four paintings a year, doing her part to support an ever-growing arts community in Beaufort County. This year, two of her works are among the 130-plus now hanging in the show.

“I think it’s a real interesting way to help the arts council and, in so doing, you’re helping the Turnage now. And I’m one of the people who really believes how important the Turnage is to the community as well as to people up and down the river,” Leach said.

While Leach described the Little Art Show’s closing reception as a nice party and a nice event for a good cause, she said it’s a lot of fun to see watch the artwork disbursement unfold, as there might be a bit of bartering and trading between Little Art owners.

The exhibit will not be closed to incoming work until May 15 — if an interested artist can have their work on the wall by then, that artist is welcome to stop by the Turnage to pick up a canvas, Toler said.

“If the past is any indication we will sell them all. We have never done this and not sold out. In fact, we’ve had a waiting list,” Toler said. “If anyone is interested in purchasing a piece, I would encourage them to do it sooner rather than later.”

JUMP START: Students get an early glimpse at available…