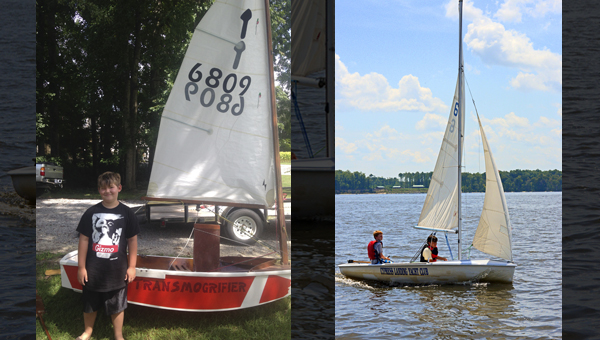 Little Washington Sailing School completed a tremendously successful seventh season, winding up with a week of advanced classes capped with the Dog Days Regatta on Aug. 15. This race was sponsored by Capt. Sam’s Boatyard and Coastal Photography; four LWSS teams participated in races held on the Pamlico River. Racing boats from Pamlico Sailing Club also participated in a separate fleet using a handicap rating system. All of the entry fees for the regatta are donated to LWSS.

While the wind was light, three races were completed in the LWSS 420 sailboats with Jackson Wilder, skipper, and Raphael Lilley, crew, finishing as the winners. In second place was the team of Rosie Lilley, skipper, and Morgan Watkins, crew. At the awards ceremony, each of the participants received a framed picture from Elbert Kennard of Coastal Photography.

Also at the after-race social, a drawing was held for an El Toro class sailing dinghy; raffle tickets had been sold throughout the season. Ethan Beattie of Bath, who had participated in one of the earlier weeks of sailing school, won this craft.

This has been a terrific season for LWSS, with 132 students participating. The addition of the Optimist class boat permitted starting students at 8 years old. The Optimist is an international class with more than 100,000 boats sailing worldwide. Giving junior sailors an earlier start facilitates faster learning and jumpstarts a move into the larger 420 sailboats.

LWSS also partnered with the PAL program again this year — 11 students from the program completed a week of sailing instruction.

LWSS is a nonprofit community sailing program in Washington, aimed at children from ages 8 to 16, regardless of their resources. LWSS continues its growth, teaching kids to sail and bringing our community together to support sailing, to engage in sailing activities and to raise awareness of Washington’s waterfront assets.