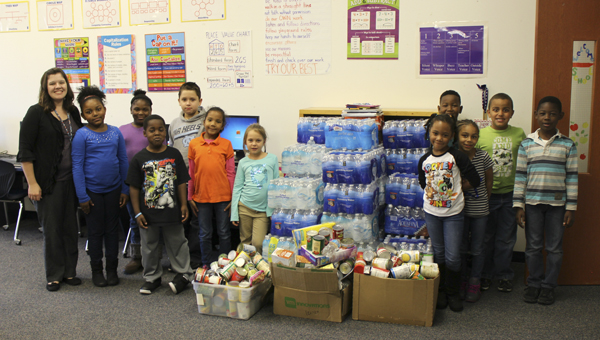 SARAH HODGES | CONTRIBUTED
Students from S.W. Snowden show some of the items they have collected to help flood victims in South Carolina.

A day that appeared to be much like any other in Judy Cleary’s seventh grade Science class has turned S.W. Snowden Elementary School in Aurora into a hotspot of activity. And all to benefit people these students have never seen.

“We were studying Hurricane Floyd,” Cleary said. “The class was looking at the storm, its impact on this area and tracked the storm’s path.”

As a part of the study, the class maintained hurricane logs and dug deep into the storm. Some students were able to relate what they learned about Hurricane Floyd to what some saw firsthand in our area with Hurricane Irene just a few years ago.

Tyaunna Tyre and Jartavian Campbell, both in Cleary’s seventh grade Science class, were eager to answer that very question. As for the people of South Carolina, “that was their Hurricane Floyd or Irene,” Campbell explained.

Once they put their own memories of Hurricane Irene with their newfound knowledge of Hurricane Floyd, it was time to take action.

“We began to collect bottled water, canned goods and even school supplies to send to the people in South Carolina,” Tyre said. “We just wanted to help.”

The challenge was issued to the school of less than 200 students and they met it head on.

Today, nearly 6,000 bottles of water, canned goods and school supplies have already been collected by the school family, with more coming in. Collections will be accepted through Friday, when the school holds a celebration concert starting at 3:30 p.m. The community is invited to come and bring canned goods or bottled water or school supplies. The Giving Back Benefit Concert and Dance Off runs until 6 p.m.

“Mr. Hampson’s fourth graders knew they could not win top collecting classroom,” said Catherine Tahaney, principal of S.W. Snowden Elementary School. “So they decided to give their contributions to Ms. Norris’ class to help them win.”

That is the very spirit of giving that has become apparent throughout this effort, according to school officials.

For third grader Yamilet Osorio Rosalino, it’s about a feeling. When asked why she wanted to give she gave,  she said, “It made me feel happy.”

The bright-eyed, 8-year-old said, “Helping gives you another friend.”

And she’s okay with the fact she will never meet them. She’s just happy to make a difference, an attitude of caring shared throughout the school.

Tyre’s favorite part has been knowing they are helping the people of South Carolina. Campbell shares that feeling but admitted that hearing the results of the classroom competition over the intercom was pretty great — screaming and cheers could be heard all over campus.