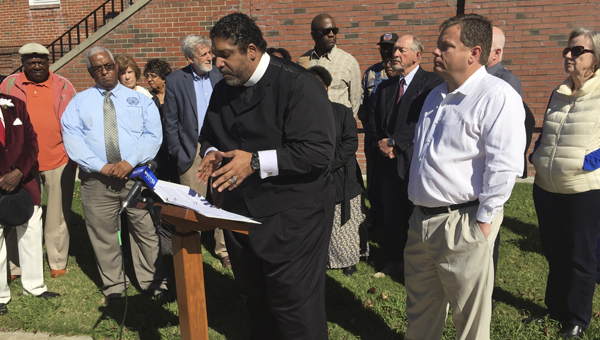 CAROLINE HUDSON | DAILY NEWS
LEGAL BATTLE: Rev. William Barber, president of the N.C. NAACP, spoke at a press conference Wednesday morning announcing the decision to file a complaint with the U.S. Department of Justice regarding the removal of Judge Milton Fitch Jr. from the case.

Belhaven and state NAACP officials announced Wednesday morning at the Beaufort County Courthouse their intent to appeal the decision to dismiss the hospital lawsuit, as well as their intent to file a complaint with the United States Department of Justice.

The Town of Belhaven and the state NAACP brought the lawsuit alleging fraud, breach of contract, breach of fiduciary duty and unfair trade practices against Vidant Health and Pantego Creek LLC, which manages the property.

The lawsuit began in state court with Judge Fitch, but Vidant requested to have it moved to federal court because of the Title VI complaint portion of it. But the federal courts sent it back to the state, and despite the initial approval for Judge Fitch to stay on the case, Superior Court Judge Stuart Albright out of Guilford County ended up being appointed to the case.

Judge Albright presided over the latest hearing on Oct. 6 and dismissed the lawsuit against Vidant.

“What changed? And how do you get to make those kinds of changes in a back room?” he said at the Wednesday morning press conference.

Barber said eastern North Carolina has had a long history of keeping African-American judges out of the court system, and he thinks some of that prejudice could be at play in this situation, as Judge Fitch is African-American.

“People are beginning to see how wrong it is,” he said. “We should all be deeply concerned about that kind of distortion and destruction of our judicial system.”

“We are positive that they will rule in our favor,” NAACP lawyer Allen McShirley said of the appeal. “There is absolutely no excuse for allowing these delay tactics to continue.” 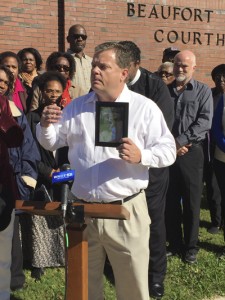 CAROLINE HUDSON | DAILY NEWS
RALLYING CALL: Belhaven Mayor Adam O’Neal holds a picture of Portia Gibbs, a Belhaven resident who passed away from a heart attack about a week after Vidant Pungo Hospital closed in 2014.

Vidant closed Vidant Pungo Hospital on July 1, 2014 due to its operating on a deficit. Vidant officials have said they acted with good intention and did not break any of the terms of contract with Belhaven.

The medical nonprofit is building a 24-hour, multispecialty clinic in Belhaven to help accommodate medical needs and has invested millions of dollars in the community since the hospital’s closure, according to Vidant communications manager Christine Mackey.

At the press conference, Belhaven residents Phyllis Credle Brimmage and Evelyn Jennette spoke of the recent experience of the death of their mother, Joyce Credle, from a heart attack.

Brimmage said although paramedics did everything they could to save her mother, she stood no chance after it took about two hours before an ambulance arrived to transport her to Vidant Beaufort Hospital in Washington.

Rev. Barber said he thinks their mother could have survived if the Belhaven hospital were open, as that would’ve been a five-minute drive to the emergency room.

“This is a hurt, a feeling I can’t explain,” Brimmage said, quoting from a post on her Facebook page. “Until you actually walk in somebody else’s shoes you don’t know.”

“I also understand and know that you can’t put a price on somebody else’s life,” she said. “Give us a chance.”

But some Belhaven residents still feel the campaign to reopen the hospital will end up hurting the town more than it will help in the end and have criticized Mayor Adam O’Neal for his spending and town management.

“Don’t hurt Belhaven further to make a very weak point. You have wrongly invested your time and energy in something that will only divide us further as a community. If you want to really provide leadership, humbly admit the cause is lost and think about Belhaven’s future and not its past,” Belhaven resident David Pierce wrote in a Letter to the Editor.

“We really can’t afford what we’re paying for this,” Alderman Vic Cox said in a previous interview. “The majority of the citizens I’ve talked to feel that way.”

But Karen Wahab, also a Belhaven resident, said this issue isn’t just about the town but is happening all over the nation.

The press conference brought visitors to Washington from the surrounding area, as well as several Washington residents who said they are also concerned about the fate of Vidant Beaufort Hospital.

Joyce O’Neal said she has an 88-year-old mother who still lives in Belhaven and Credle’s recent death makes her fears more real.

“We will never stop fighting for what is right,” Rev. Barber said. “Justice delayed. Justice denied. People are dying.”