MORE WITH LESS: Schools asked to do more with less funding 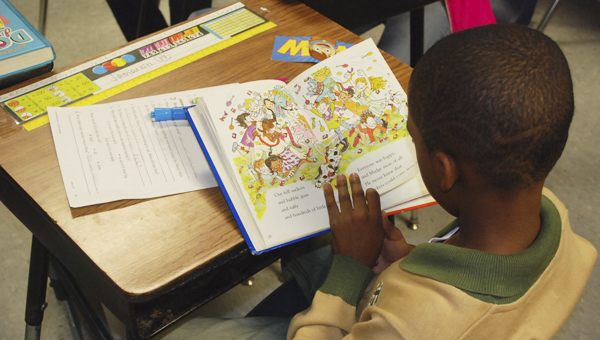 State funding for education has plummeted over the past decade, and it has many Beaufort County Schools employees questioning what to do next.

Beaufort County Schools Superintendent Don Phipps said as state money has dwindled, the school district has tried its best to make up for the cuts with local funds.

“There’s not a lot of fat left anywhere,” he said. “After a while that does have an effect.” 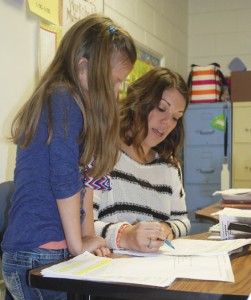 CAROLINE HUDSON | DAILY NEWS
ONE-ON-ONE: Taylor Williams, a third-grade teacher at John Cotten Tayloe, assists one of her students with a reading assignment while the other students read on their own.

One of the most glaring cuts is funding for teaching assistants, Phipps said. While the General Assembly did agree to maintain funding this fiscal year after haggling for months over an overdue budget, the amount of assistants has continued to drop over a span of several years. And Beaufort County’s local funds can no longer bridge the gap, according to Phipps.

As it stands, every kindergarten class is allotted one teaching assistant and every first-grade class must share one assistant between two classrooms. This means teaching assistants’ services are stretched thin, but the requirements are only growing, Phipps said.

“We’ve dealt with that because those positions have been cut drastically,” he said. “The ability to staff and have as many teaching assistants in the classroom is difficult.”

Bubs Carson, principal at John Cotten Tayloe, said he has seen first hand how the cuts in assistant funding affect his school.

When Carson came to the school 15 years ago, every second-grade teacher had a full-time assistant and most third-grade classes had at least a part-time assistant — in addition to the younger grades’ assistants. Now, John Cotten Tayloe is now operating with just eight or nine teaching assistants.

He said the teaching assistants are still coping with the task of splitting the school day between more than one teacher.

“That’s been a huge adjustment for everybody,” Carson said. “They’re no longer working with one group of students.”

And it doesn’t end there.

Phipps said the school district’s Low Wealth Supplemental Funding, which is allotted to districts with fewer resources, has fallen from about $1.6 million several years ago to now just around $600,000.

Beaufort County Schools is also faced with “unfunded mandates” from the state and federal level.

With the math assessments, Lilley said the schools are required to give the exams but must handle all of the logistics within their own counties. 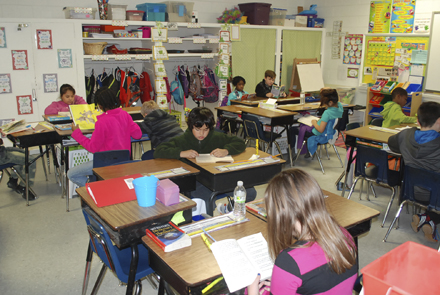 “We have to administer that twice a year and we have to pay for all the copies of those assessments,” she said, adding that the schools must also score the exams. “There’s not any data interpretation from DPI on those results.”

Lilley said there is not enough funding to hire more teachers to make duty-free lunches and planning periods a reality. Teachers are instead needed to help with hallway duty or assist with other responsibilities during a planning period.

It is also left up to the schools to train teachers for CPR certification, and although it is a requirement for high school students to be certified to graduate, the state does not fund even the basic resources, such as the mannequin dummies, Lilley said.

Beaufort County was forced to halt its driver’s education classes at the beginning of this school year until the legislature decided on a budget. The school district pays the state’s driving school about $225 per student for a certified teacher and must also provide a car for the driving portion of the class. State funding goes toward reimbursing the district, but without that funding, the classes were not able to continue on a regular schedule until mid-September.

“Some of those (requirements) are small scale and some are a little bigger. … You kind of wonder how you’re going to do that,” Phipps said.

While education funding continues to diminish, the majority of the N.C. budget is still allotted to the schools. And the responsibility for lessening resources cannot be entirely placed upon the state’s shoulders.

Greg Singleton, executive director for federal programs at Beaufort County Schools, added that there are even more of these unfunded requirements at the federal level, including Section 504, in compliance with the Rehabilitation Act of 1973, which requires schools to accommodate students with disabilities, or the former No Child Left Behind mandates.

Singleton said that while the provisions for disabled students are needed and the school system is happy to comply, there is also no funding to help the schools cover the costs of compliance measures.

“In education we run across this many times,” he said. “Those are some of the things that, you know, first come to mind.”

Elizabeth Hodges, a third-grade teacher at John Cotten Tayloe, said during her nearly 40 years teaching, she has seen the responsibilities grow for educators, as she often sees students come to school without the essentials: pencils, paper or even a full stomach.

“It has made me dip into my pocket to provide things for the children,” she said. “We need supplies for teaching effectively.”

Recently, Hodges said she had to provide gloves to two students whose parents called to ask the school for help — gloves that she purchased with her own money. She has also had to ask the Parent-Teacher Association (PTA) for basic school supplies, such as construction paper, or purchase them herself, due to the lack of funds.

And while she doesn’t care about the cost, it’s hard to ignore how these purchases add up over time.

“I was very thankful for the bonus,” she said with a laugh. “I mean, what are you going to do when you love the child?”

Although a lot of parents are in tune with their child’s education, she said some parents have also chosen to shirk responsibility in favor of placing it on the teachers’ backs.

“Some of the parents are making poor choices with the money that they have,” Hodges said. “Over the years, the teachers and the school systems are having to take on the parental role.”

“I have a lot who are working so hard and their parents are 100-percent behind them, but it’s that handful,” she said.

Hodges said she is fearful of the future of education in North Carolina, and she thinks there needs to be a shift back in the right direction — a shift that includes more funding to properly educate students and to be able to meet their needs, educationally, emotionally and physically.

“I want every child to have what they need,” she said. “Something needs to turn around. It just does.”