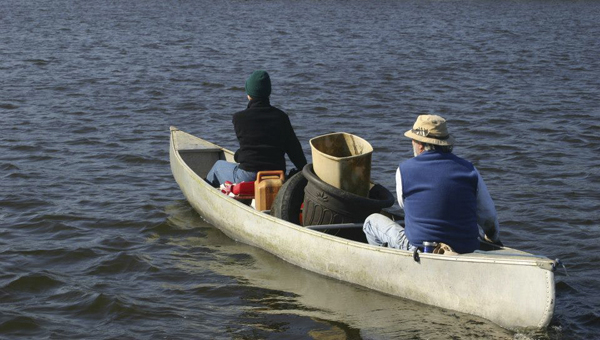 PAMLICO-TAR RIVER FOUNDATION
BIG LOAD: Kayakers collect as much trash as will fit into the boat during a previous year’s Riverkeeper Cup Cleanup Challenge.

Washington residents will pull on their boots, strap on gloves and break out the kayaks, as part of the eighth annual Riverkeeper Cup Cleanup Challenge on Saturday.

The event, organized by Sounds Rivers, will be held in five locations: Greenville, Louisburg, Tarboro, Rocky Mount and at Washington’s Havens Gardens. Whether by foot or by boat, participants will scour the Tar-Pamlico River to collect as much trash as they can.

The municipality that collects the most trash will be named the Riverkeeper Cup champion — a friendly, competitive impetus to help clean up one of the area’s most prominent natural resources. Washington took home the title in 2014.

“Last year more than 100 volunteers converged from communities along the Tar-Pamlico River and removed over 3,400 pounds of trash from their community waterways and shorelines, and this year we challenge volunteers to join the cleanup and represent their town,” a press release stated.

Heather Deck, Pamlico-Tar riverkeeper, said that the cleanups make a visible difference in the environment, thanks to the volunteers.

“There’s no doubt that every little bit helps,” she said. “On years that’s it been drier, you get to the point where you have trouble finding things to clean up.”

More than 450,000 people live within the Tar-Pamlico watershed, which is the fourth-largest river system in the state, according to the release.

Sounds Rivers organizes two of these cleanups per year, one in the spring and another in the fall. Since the biannual cleanups’ inception in 2006, more than 30 tons of trash has been removed from the river, according to the press release, although Deck would put the estimate closer to 50 tons.

“We often see the negative effects of trash on our waterways and wildlife. The increasing amount of trash that finds its way into the rivers and tributaries truly does have a negative impact on the ecosystem,” she said.

Volunteers of all ages are invited to come to the Washington cleanup site, at the Havens Gardens boat ramp, at 8 a.m. Saturday. Although the entire process is expected to take a few hours, Deck said the results will be worth the effort.

“It’s going to be perfect weather, you know, to be outdoors, and it’s a good opportunity,” she said.