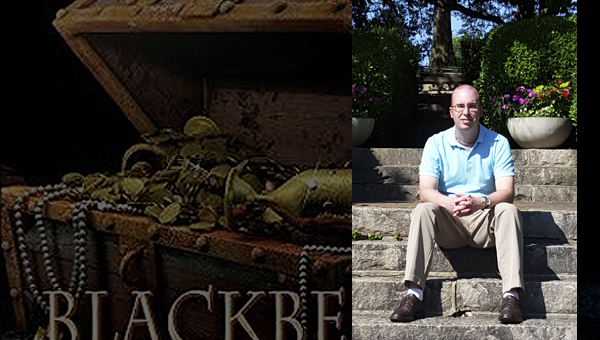 A decades-old unsolved murder, the 300-year-old mystery and an adventure of a lifetime collide in the new novel “Blackbeard’s Lost Treasure” by Caleb Wygal.

The novel is about two friends, Darwin Trickett and Caine. An archivist with the North Carolina History Museum in Raleigh, Trickett stumbles across the journal of Blackbeard’s wife, Mary Ormond, along with a treasure map tucked inside. Calling on Caine, the two set off on an adventure that takes them across eastern North Carolina, from Bath to the Outer Banks.

In the style of Clive Cussler or Dan Brown mysteries, Caine and Trickett unravel the clues in both the diary and the map, encounter a Blackbeard impersonator with shady dealings and end up fighting for their lives, and, ultimately, changing history, according to Wygal.

While Wygal resides in Concord — though he’s familiar with eastern North Carolina — he grew up vacationing with his family on the Outer Banks during the summer. He said a visit to Bath a few years ago gave him a local view on Blackbeard and the legend of his treasure. The origin of that treasure and what the treasure actually entailed remain a mystery.

“Nobody really knows where his treasure came from. It’s fiction, so I came up with a way he could’ve gotten it,” Wygal said.

Wygal’s fictional account bears similarity to Blackbeard historian Kevin Duffus’ theory that the wreck of a Spanish fleet off the Florida coast in 1714 was an integral part of the Blackbeard story — the ships carried treasure from South America. The argument of whether Blackbeard was from England or was a Bath native, as Duffus has suggested, also makes an appearance in Wygal’s novel.

“From everything in my research, everything points to Bristol, England,” Wygal said. “But there are locals who say his father was a farmer. I even touch on that in the book.”

“It kind of changes their lives from start to finish. … It’s a believable story. I’ve had people tell me they want to take a shovel and go dig in this place or that place,” Wygal laughed.

“Blackbeard’s Lost Treasure” can be purchased through Amazon, Barnes & Noble and through the publisher’s website, Blackrosewriting.com.

For almost 50 years, it’s been a staple in downtown Washington. Nothing over-the-top, but yet quaint and beautiful, Lillian’s Beauty... read more