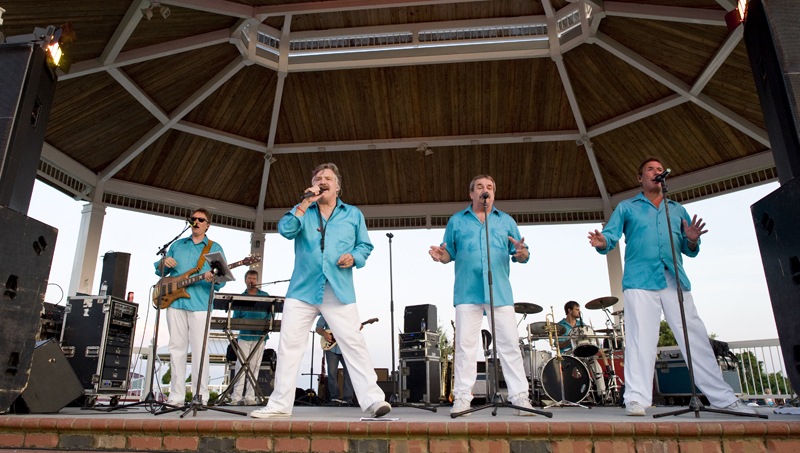 BEACH MUSIC: Washington native Craig Woolard (second from left) performs with beach music sensations The Embers during a past event at Festival Park. The Embers will perform Friday night as part of the festivities surrounding the Washington Summer Festival.

School’s out and the Washington Summer Festival opens tonight. For many, the two combined means the summer is officially kicked off.

Starting at 5 p.m., Stewart Parkway will be lined with food and arts and crafts vendors, along with rides and games for children of all ages. The evening caps off with a Festival Park performance by The Embers, followed by fireworks at 9 p.m. Saturday holds much of the same amusements, with a few additions: a Princess and Superhero meet and greet on the deck at the Washington-Beaufort County Chamber of Commerce, where children can meet the characters Elsa and Anna from “Frozen,” Spiderman and Superman, from 11 a.m. to noon; free sailboat trips on the Pamlico River with sailors from Little Washington Sailing School; and unlimited amusement rides from 10 a.m. to 3 p.m. with the purchase of a $15 armband.

According to Chamber Executive Director Catherine Glover, Chamber staff has been successful in steering the festival in a more local direction over the past several years.

“We’ve got more local people than out-of-towners this year,” Glover said, of the vendors signed up to participate. “A lot of people are using it as a fundraiser for their organizations or for informational booths about what they do.”

Craig Woolard, The Embers front man, falls into both the local and out-of-towner categories: he lives in Cary now, but his roots are deep in Washington. Woolard’s beach music has played a consistent part in summer festivals of the past 33 years.

“I don’t know that we’ve played every one, but I sure have around for a lot of them,” Woolard laughed.

Woolard spends 240 days of the year on tour with The Embers, but playing in Washington is always special for him, partly because the covered stage at Festival Park overlooking the Pamlico River is a great venue; partly because he sees so many familiar faces in the crowd, he said.

“I grew up here, I sing the praises the river everywhere I go. My hometown is a huge deal for me — everybody who knows me knows that,” Woolard said.

Woolard said he believes the combination of the Washington Summer Festival, held on the waterfront, along with the charm of downtown Washington, is an irresistible draw.

“The summer festival, if it brings people in to look at it for the first time, they’ll be back,” Woolard said.

Though summer doesn’t officially arrive until June 20, the Washington Summer Festival is a celebration of the season for residents and visitors alike.