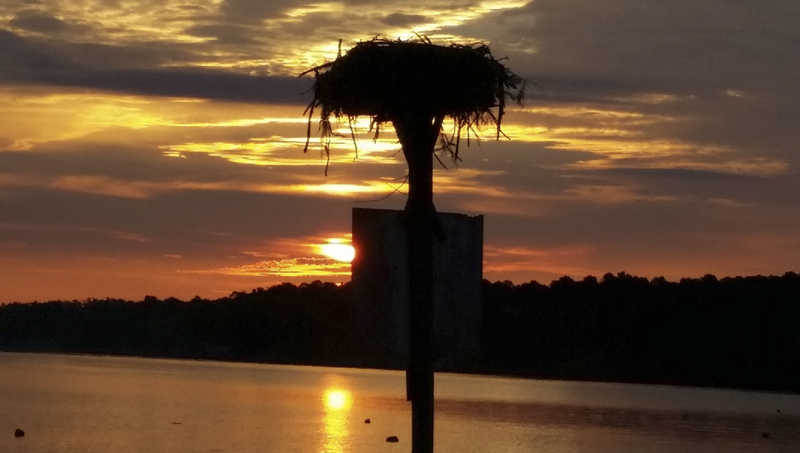 ON THE CREEK: An osprey nest rests on top of a channel marker in the mouth of Blounts Creek at sunrise. Creek supporters are in the midst of a court battle with the state and a mining company. (BOB DAW)

The case pitting supporters of Blounts Creek against the state and mining company Martin Marietta Materials LLC wrapped up Thursday in Raleigh.

Administrative Judge Phil Berger Jr. told all parties involved that it could take him up to three months to review all the documentation, evidence and testimony given during the two-week-long hearing.

The case has bounced around North Carolina courts since September 2013, when Sound Rivers and NCCF, with the assistance of Southern Environmental Law Center, filed a petition challenging a state permit issued to Martin Marietta, allowing a discharge of up to 12 million gallons of fresh water per day into the headwaters of Blounts Creek. The environmental groups argue the influx of water used in the limestone-mining process would change the pH of the brackish creek, potentially decimating aquatic life in the state-designated nursery for saltwater species. N.C. Department of Justice and Martin Marietta attorneys have argued the creek’s ecosystem may change the pH, but it would promote the proliferation of other species.

The case initially came before Berger in January 2015, where he ruled that Sound Rivers and NCCF were not “persons aggrieved” by the permit and therefore had no standing to challenge the permit. However, on appeal, Superior Court Judge Douglas Parsons Jr. found the opposite and returned the case to the Office of Administrative Hearings, and Berger, for this week’s full evidentiary hearing — one that included expert witness testimony from several independent biologists, as well as Tom Belnick, supervisor of Division of Water Resources’ permitting process, and Tom Reeder, who was director of DWR at the time the permit was issued, but is now assistant secretary of the Department of Environmental Quality.

Belnick testified that another suggested option — to discharge the water into the freshwater Swift Creek, to the south of the southern Beaufort County mine — was never considered though it was recommended by the officer who conducted a public hearing when the permit was being considered. Reeder told the court the biological integrity of the creek would not be impacted, though a biological integrity study was never done by DWR officials, according to a memorandum from Deck.

According to Boulden, the testimony of DWR biologist Eric Fleek was helpful to the Sound Rivers case. Fleek testified that during the lead-up to the permit’s issue, he had emailed DWR colleagues that it was his belief discharge of that magnitude would transform the creek into a body of water that did not exist naturally in the coastal plain of North Carolina, Deck wrote.

During closing arguments, state attorneys made the point that the law defers to state agencies such as Division of Water Resources in permitting decisions, while Martin Marietta attorneys continued to make the argument that Sound Rivers and NCCF are not “persons aggrieved,” and that businesses owned by Boulden and Daniels were “hobbies” because they did not make much money, according to the memo.

Boulden said the issue came up when he was being cross-examined attorney George House, with the Greensboro office of Brooks Pierce, which is representing Martin Marietta.

“I took exception to that, because, as I told Mr. House, I don’t consider it a hobby and neither does the IRS when I file my income tax forms,” Boulden said. “That shut him up.”

Sound Rivers’ closing arguments focused on misstatements by the opposing counsel and the potential damage that could be done to Blounts Creek, according to Deck.

“This is a tale of two creeks. … the one we have known that is a high quality resource, used and loved by so many and the one that Martin Marietta will create, allowed by DWR, that as our experts demonstrated, will alter it to a creek system that is found no where on the coastal plain of North Carolina,” Deck stated.