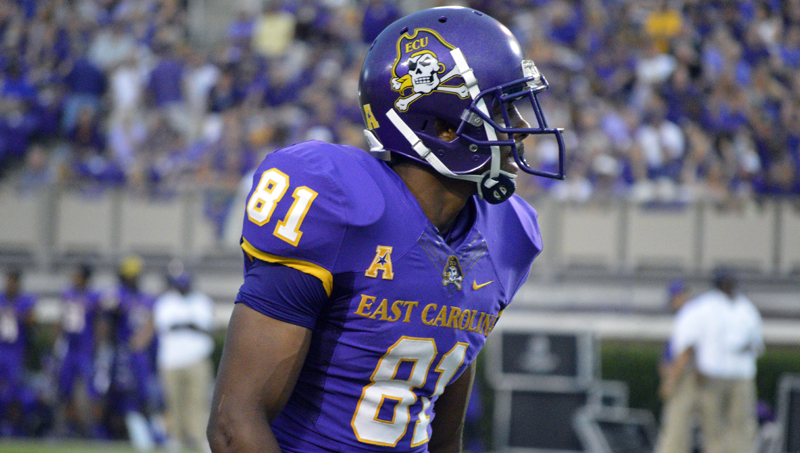 Jimmy Williams lines up during a past ECU game. The former Washington standout and now senior Pirate is ready to make an impact for a new-look ECU team.

He went on to miss five of the last seven games while his Pirate teammates struggled down the stretch. Williams said he has been working on his strength and stamina to ensure a healthy season in 2016. First-year ECU offensive coordinator Tony Petersen said Williams’ work ethic is certain to guide him to success in his senior campaign.

“I don’t know about his injuries in the past,” Petersen said. “All I know is that kid is out here working harder every day. He’s been healthy, hasn’t missed a rep. He’s made plays and he’s one of our top receivers, so we’re excited about him.”

Williams is a man of few words and has earned the nickname “The Mechanic” because of how he approaches practice each day.

“He’s having a great camp,” Petersen said. “He just does his job. He’s made a lot of plays and rarely drops a football and we can’t be more pleased with him.”

Williams said he has enjoyed his senior-season camp and he feels comfortable in his role headed into the season.

This fall camp has been critical proving ground for Williams in front of a first-year coaching staff. He feels he has positioned himself well headed into the season.

“I think things have been going well and I feel like this has been the best camp that I’ve ever had,” Williams said. “It’s been all about just progressing, you know, every year.”

One of Williams’ biggest assets during the summer is his constant contact to Greenville and teammates. Philip Nelson has become the presumed starting quarterback since Kurt Benkert transferred to Virginia.

Williams and Nelson both said the extra passes the pair threw together over the summer helped build a stronger connection between the two.

“It’s been a good progression,” Williams said. “Coming out here, working over the summer on days when we just don’t have anything to do, we would come out throwing, getting timing stuff down. All the way up to practice now, it’s about being confident in him and his abilities.”

Nelson continued, “He’s a guy that can get overlooked in this offense but, in my mind, he should never be overlooked. He’s always going to be in the right spot and I really love throwing to Jimmy.

Though Williams is a premier athlete in an offense loaded with athletic talent, he said his summer has been spent working on the small parts of his game.

“Everyday I’ve been working on my technique,” Williams said. “You can’t always rely on athleticism, so working my technique has been the biggest thing.”

First-year head coach Scottie Montgomery said Williams will be someone he looks to for both added receptions and help in blocking this season.

“He’s a consistent contributor and a dynamic talent catching the ball down the field,” Montgomery said. “He’s tough, great for us in the run game and he’ll be tough to keep off the field.”

Williams will have only one more week to wait before kicking off his senior season as a Pirate just a few miles away from his Washington home.