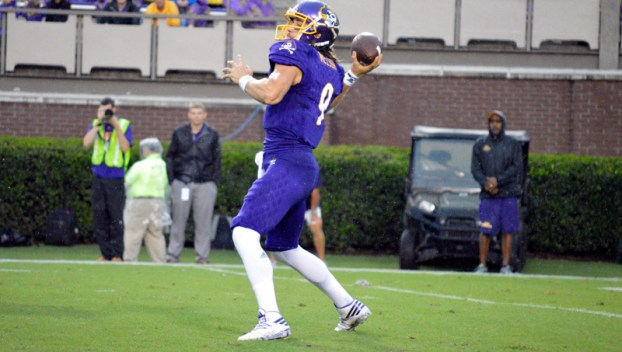 Philip Nelson steps back to make a pass against Western Carolina on Saturday. Nelson, who hadn’t played since Dec. 2013, reintroduced himself to football fans when he ran seven yards toward ECU’s student section for the first touchdown of the 2016 campaign.

Nelson reintroduces himself to football

GREENVILLE — Philip Nelson is even-keeled, quiet at times, and deflects attention when it comes his way.

His breakout performance Saturday night at Dowdy-Ficklen Stadium in East Carolina’s 52-7 rout of FCS opponent Western Carolina made it all the more difficult to deflect.

The vision Nelson had for himself held up. He said the weapons he has on offense and his own self-confidence, without cockiness, lined him up to success in his first game played since Dec. 2013.

Nelson’s career took a detour after Minnesota’s 2013 Texas Bowl loss to Syracuse. He took to Rutgers to rebuild his career after his sophomore season with the Golden Gophers. A pair of later-dropped charges left him dismissed from the program and seeking a new home, and he found it.

Nelson, now a senior, was 28-for-32 in his first start for ECU. He threw for a career-high 398 yards and five touchdowns. He opened the scoring with a short seven-yard dash off a read option. He ran into the end zone in front of ECU’s student section, The Boneyard, and sent Pirate fans into a frenzy. Nelson said the moment eluded him.

“It was unbelievable,” Nelson said after the game. “That happened so fast, it was just a blur. I couldn’t tell you anything about the moment. That’s the only way to describe it.”

The summer was where Nelson’s vision of success started. He was handed the keys to ECU’s offense by default when Kurt Benkert chose to transfer at the end of last academic year. Nelson had the summer to work with receivers and the rest of the offense to prepare for Week 1.

“(The summer work) was huge,” Nelson said. “It makes me feel good as a quarterback that what we did over the summer really paid off. I think you guys saw that today, I can’t say enough about the receivers, out there three days a week during the hot summer, getting on the same page.”

Zay Jones continued, “I think each day counts and directly correlates to everything you do in the season.”

Nelson, dubbed as “The Blonde Bomber” by Jones, knows he has a steep hill to climb next weekend. NC State will visit ECU and expectations couldn’t be higher. The Pirates have won back-to-back games against the Wolfpack (2010 in Dowdy-Ficklen and 2013 at Carter-Finley Stadium) and Nelson knows the moment is coming.

“Everyone talks about (the rivalry with NC State),” Nelson said. “Even just from being here a year, I understand.”

Nelson said Saturday was heavily about keeping his emotions in check. He did, however, say he would have to “let it loose soon” and next Saturday may open up the perfect opportunity. It’s been circled on everyone’s calendar since the schedule’s release. For ECU, it’s a chance to continue asserting its recent dominance over in-state foes. For NC State, it’s a chance at redemption.

And for Nelson, the game will serve as crucial proving ground. His first game against an FBS team will also be his first of three consecutive games against “Power 5” opponents.

For now, though, Nelson is just going to prepare one day at a time.

“Tonight, I’ll go out to eat and celebrate this win,” Nelson said. “I’m excited to let this soak in a little bit, but it’s back to work tomorrow.”