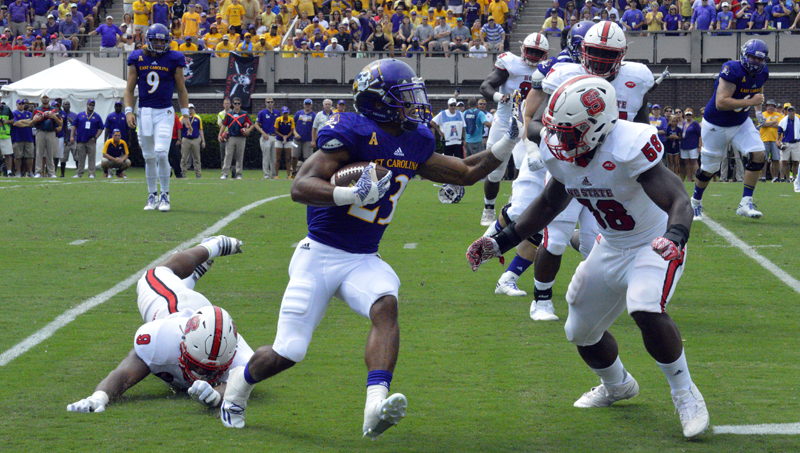 Quay Johnson shakes a tackle and looks to push off of another. Johnson led ECU with 75 receiving yards in a win against NC State on Saturday.

GREENVILLE — After a pair of fumbles by East Carolina running back Anthony Scott in the second and third quarters, he was given a shot at redemption near the goal line late in the fourth quarter.

Scott took hand off up the middle on second and goal from the five-yard line and plowed into the end zone to give ECU a 33-30 lead over in-state rival NC State. The Pirates earned the go-ahead score with 5:49 left in the game.

“(The fumbles) were just a minor setback,” Scott said after the game. “I came back and told myself that I owe my teammates one. So, I gave them one for every time I messed up.”

Scott said the final touchdown was something he’ll hold onto from this game.

“It’s a feeling you can’t describe, really,” Scott said after thinking back on his game-winning run into the end zone. “It’s just that feeling like you’re about to walk into paradise.”

Anthony Scott, who had 90 all-purpose yards, celebrates as he runs into the end zone for his first touchdown of Saturday’s game. He had one receiving and one rushing touchdown. Scott struggled a bit with holding onto the ball, but redeemed himself by scoring the game-winning touchdown.

From there, the Pirate defense held off the Wolfpack. On the ensuing drive, after a pair of early first downs, quarterback Ryan Finley (20-of-31 with a touchdown) failed to complete a pair of passes. A complete pass on second down was quickly snuffed out by Yiannis Bowden to bring up a third down, which NC State converted on just four-of-11 times.

The Pirates ran the clock down to 51 seconds remaining after their final drive and a punt into State territory. Sophomore cornerback Corey Seargent (three tackles with one pass breakup) laid a big hit on first down and set the tone for the final drive.

“It was a great feeling,” Seargent said. “We had to get off the field and finish the game. I hurt my shoulder a little bit but I got back out there.”

State moved into ECU territory on its final drive. From the 46-yard line, Finley delivered a strike to Bra’Lon Cherry for 22 yards, but defensive backs DaShawn Benton and Travon Simmons dragged the Pack receiver to the ground with no time remaining. The win marked the Pirates’ sixth straight win against the Atlantic Coast Conference and third straight over the Wolfpack.

Former NC State commit James Summers scored a pair of rushing touchdowns in the game, including a 27-yard run in the first quarter to put ECU up 9-0 and a third quarter touchdown which put ECU back on top with 4:04 left in the third quarter.

Summers’ second touchdown of the day came after quarterback Philip Nelson (33-of-43 with a touchdown and interception) took a big hit from an NC State defender, which resulted in a roughing the passer penalty.

“They made a dirty play on our quarterback and I came in with a purpose,” Summers said. “That’s why I went in the end zone and scored.”

Scott’s first score of the day came late in the second quarter on a 25-yard strike from Nelson. The seesaw battle saw Nelson’s lone passing touchdown of the day scored just two minutes after a State touchdown. In typical fashion of the contest, the Wolfpack scored just 19 seconds later.

Ultimately, the game came down to missed opportunities early in the game by NC State. Kicker Connor Haskins missed a pair of field goals in the first quarter from 44 and 42 yards out.

The Pirates outgained State 171-60 in the first quarter. Senior linebacker Dayon Pratt said the hot start was important in the intense in-state game.

“It’s critical because I believe that first drive determines everything, just like kickoff,” the Pirates’ leading tackler said. “You have to go out and let the other team know early what you’re bringing for the rest of that game.”

ECU improves to 2-0 ahead of next weekend’s trip to South Carolina.